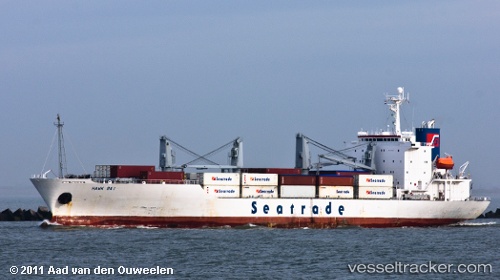 Reeder arrested due to unpaid debts

The "Baltic Performer" was arrested on May 28, 2019, upon its arrival in Campana following a Court ruling on unpaid debt claims filed by the San Pedro Port company against the managing company Baltic Shippng. In July 2018 the master of the reefer had requested extra workers and extra loading hours after a week’s delay, caused by rain and a broken crane. His request was met, but the subsequent payment of $60,000 wasn’t made to date. The reefer, however, was not the ship involved in the incident, so it was a provisional arrest on a sister ship. The ship will remain detained until either the debt and court expenses have been paid or a deposit placed.

The "Baltic Performer" left the port of Brest again after the shifted cargo was secured again, on Oct 27 at 9.30 p.m. and headed to Dakar, ETA Nov 2.

Cargo shift in Bay of Biscay

The "Baltic Performer" got in difficulties in heavy weather off south-west of the tip of Brittany, 112 miles south of Penmarc'h, on Oct 21 at 3 p.m.Part of the cargo of 6,120 tons of vegetables, arranged on pallets, had shifted, causing a portside list of 15 degrees. It asked for assistance in the morning of Oct 22, 2017. The emergency tug "Abeille Bourbon" was deployed as an escort. It sailed from Camaret at 7 p.m. and reached the reefer on Oct 22 at 2 a.m. The convoy headed for shelter in Brest. The reefer had sailed from Flushing on Oct 19 bound for Dakar and has a crew of 25 on board. Weather on scene was wind force 7 on the Beaufort scale and swell of 6 to 9 meters. French report with photo: https://www.ouest-france.fr/bretagne/quimper-29000/un-cargo-en-difficulte-au-large-de-penmarc-h-samedi-5331091