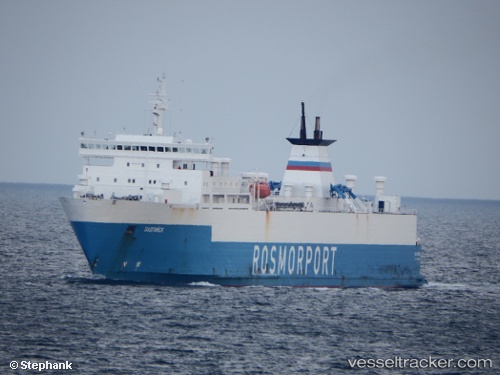 The "Baltiysk" was detained in Ust-Luga by the Port Authorities for outstanding crew wages debt after its arrival from Baltiysk on June 9, 2018. The operator of ferry, the Tans Exim Ltd., was warned twice earlier, but the crew wasn’t paid in spite of this. The company also operates the ferry "Petersburg", which was arrested in Tallinn, for outstanding debts, including crew wage debts too. The services of both ferries have been suspended.

On Dec 27, 2016, at 5.15 p.m. the "Baltiysk" developed a starboard list following a cargo shift on the upper and main decks, including two derailed oil cars, loaded with fuel, on the upper deck. The ferry was moored at Baltiysk Anchorage in the Kaliningrad Region, awaiting pilotage to port, in rough weather conditions, when the shift occurred. She was swung around and put beam on to the swell, so that the cargo started to move. At 7.30 p.m. the vessel left its anchorage and sailed out to sea to weather the storm. It docked in Baltiysk in the afternoon of Dec 29.