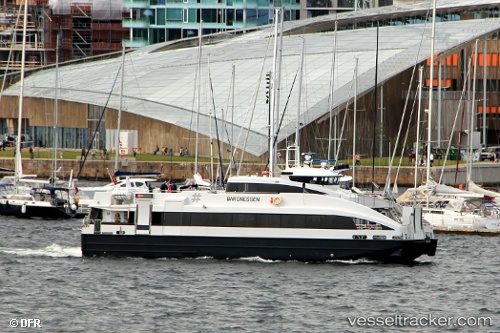 On June 29, 2017, the "Huldra" crashed into the speedboat "Baronessen" at the Aker Bridge in the port of Oslo. There were no passengers on board the "Baronessen" when it happened, but the ship some minor material damage and had to be taken out of service. She was replaced with the catamaran ferry "Tidevind". Norwegian reports with photos: https://www.aftenposten.no/osloby/Ferge-kjorte-inn-i-hurtigbat-ved-Aker-Brygge-624291b.html https://www.amta.no/nesoddbaten/oslo/ulykke/nesoddbaten-har-krasjet-ved-aker-brygge/s/5-3-241183

On Jan 10, 2013, at 1:16 a.m., the police in Follo was notified of a fire aboard the "Baroness" which was moored at the Tangen puer. Fire rescue, police and ambulance were dispatched to the ship. Shortly after it was reported that there was no open fire. There were no passengers on board when the smoke development started, only the crew. The ferry was checked by smoke divers of the fire department, also the fire department of Oslo sent a boat. The situation was under control. It was unclear whether there was open fire or just smoke on board. The smoke development could have occurred in connection with the ship's connection to shore power. The crew of three was exposed to fumes and taken to hospital for checks. The ferry was running again on Jan 11.

The "Tidebaronessen" had quite some problems in the inner Oslo Fjord on Aug 6, 2011. Passengers were trapped on deck after both the steering gear and the landing ramp failed. The ferry was heading for Son and was packed with passengers when it left the pier at Aker Brygge at 9:56 a.m., but soon headed for Nesoddtanngen instead of Oscarsborg Fortress. The passengers short time later got a message over the PA system about problems with the steering gear, and that it would take some time to get it fixed. Later it was announced that the ferry had so much trouble that it could not berth. The passengers themselves then helped to pull the ferry against the quay so they were able to get ashore. It is not the first time the ferry has problems. Also at the end of May the "Tidebaronessen" suffered technical problems and had to be taken out of service. The actual trouble was caused by a faulty generator, and the ship's electricians were busy to repair the damage. The operator hoped to have the ferry back in operation on Aug 7 morning, until then the ferry Huldra took over the ferry service. Norwegian report with photos: http://nrk.no/nyheter/distrikt/ostlandssendingen/1.7740451