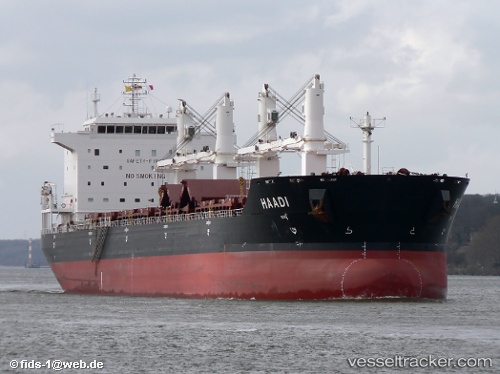 The "Bavand" was forced to delay its departure on July 28 due to a mechanical problem. The bulk carrier had been stuck at Paranagua after Petrobras refused to provide fuel for fear of breaching US sanctions on Iran. On July 25, a Supreme Court judge ordered Petrobras to refuel the two ships which started in the early hours of July 27. While the "Termeh" departed as scheduled to Imbituba, where it arrived on July 29, the "Bavand" suffered a mechanical issue and remained moored in pos. 25° 29.47' N 048° 27.68' W. She was due to sail to Paranagua in the run of July 29. Both ships had brought urea to Brazil and were to transport corn back to Iran. On Aug 6 at 10.15 a.m. the ship anchored on Sao Francisco Anchorage. Report with photo: https://www.thejakartapost.com/news/2019/07/29/mechanical-issue-delays-departure-of-iran-ship-stranded-in-brazil.html

The two Iranian ships "Bavand" and "Termeh" which had been detained for almost 50 days in the port of Paranaguá set sail for the Islamic Republic, after an STF decision obliging Petrobras to supply them. The "Termeh" set sail around noon on July 27, 2019, around noon to another port off the Brazilian coast, where he would receive a cargo of corn. Already at night the "Bavand", which was loaded, left for Iran. The trip should take about 30 days, the source added. Both ships had arrived in Brazil carrying urea and were due to return carrying corn to Iran. The "Bavand" had already shipped almost 50,000 tons of maize and the "Termeh" was expected to load another 60,000 tons. The cargo was valued at approximately 100 million reais. STF President Minister Dias Toffoli on July 24 had rejected a Petrobras appeal and ordered the company to supply fuel to the ships,. Petrobras had declined to sell fuel to the ships, saying its owner was on the list of US-sanctioned companies. The company's argument was that by supplying oil to the ships, Petrobras itself would be at risk of penalties by the US authorities. Toffoli justified the decision by stating that the Brazilian company Eleva Química, which was in charge of chartering the vessels, was not on the list of US sanctioned agents and that there was no possibility for Petrobras to suffer sanctions from the Americans, since the refueling would be done by court order. The president of the Supreme Court, who decided the case after a court dispute in the lower courts, also recalled, in his argument the damage that may be caused by the situation in the country's trade balance with Iran, the largest buyer of Brazilian corn. Iran had threatened to suspend imports of corn and other Brazilian products if Petrobras did not supply the two freighters of the Iranian company Sapid Shipping.