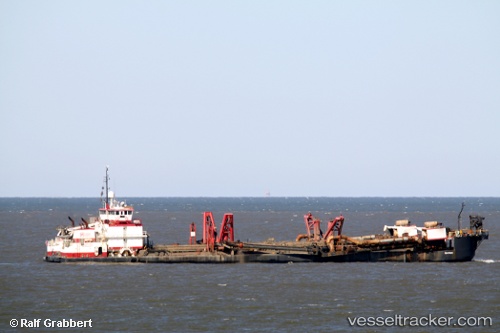 At 12:56 p.m. on Apr 1 the US Coast Guard announced that it had reopened the Calcasieu Ship Channel after determining that the condensate oil and natural gas pipeline posed no threat to deep draft vessels transiting the channel. Sonar scans of the pipeline indicated that the channel was clear of any protrusions above the soil line at the site of the incident. The flow of natural gas out of the pipeline rupture has stopped, according to the Coast Guard. Divers hired by Stingray-Enbridge worked around the clock to manually shut in the sub-sea, tie-in valve. The dive team will be re-entering the channel during the next several days to assess the pipeline damage and to complete repairs. The Coast Guard, along with the Lake Charles Pilot Association, will work with Stingray-Enbridge to schedule these repair operations.

The "Bayport" was dredging in the Calcissieu Ship Channel on Mar 30, 2011, at 8.30 p.m. when they struck a 12″ condensate and natural gas pipeline. Damage to the pipeline resulted in a highly flammable fountain of gas and condensate erupting from the surface on 29-37-54N, 093-19-20W 10 miles south of Cameron jetties. MSU LC contacted El Paso Energy platform in West Cameron Block 62 one mile east of the spill site. They witnessed a slight drop in pressure in their discharge line. The platform was shut at 10 p.m. while pressure in the pipeline decreased to 750 psi. Initially, there was concern that the downstream check valve in the line was not holding. However, pressure in the pipeline has decreased steadily over the past several hours to its current reading of 290 psi at 3 a.m. indicating that the check valve is holding. The "Bayport" has been monitoring the “fountain” with its radar and has noted that the signature is now barely visible.