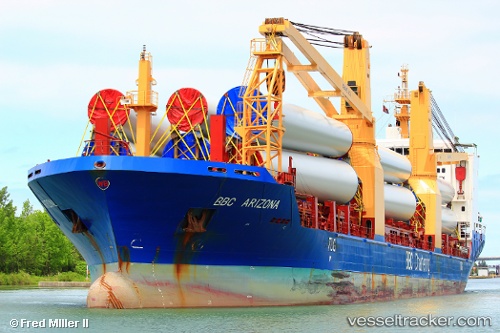 The 15 day response and clean up of leaking containers aboard the "BBC Arizona" concluded on May 14, and the Coast Guard captain of the port for Prince William Sound rescinded the captain of the port order against the "BBC Arizona" allowing the ship to depart Port Valdez. In the afternoon, Coast Guard personnel inspected the ship and its cargo to verify all requirements of the captain of the port order were met. The ship did no longer pose a safety or environmental hazard and the captain was rewcinded of the port order, allowing the ship’s departure in the evening. The "BBC Arizona" reached the Gulf of Alaska early on June 15 morning en route for Mazatlan, Mexico, with an ETA of June 24. Demobilization of response personnel and equipment began on June 15. More than 50 personnel from the Coast Guard, state of Alaska, City of Valdez, Gallagher Marine Systems, LLC, Emerald Alaska Inc., Alaska Chadux, North Star Terminal and Stevedore Company, and several marine survey companies were involved throughout the incident. Unified command operations were anticipated to conclude on June 16. Coast Guard officials issued the "BBC Arizona"’s owner a federal notice of violation for failure to notify about hazardous conditions aboard the ship, which carries a $5,000 fine. On June 14 the last of the ship’s oil filled containers were moved to the shoreside decontamination site, emptied, cleaned, and returned to the ship. Emerald Alaska Inc. also concluded clean-up and decontamination of the "BBC Arizona"’s deck. Empty oil bladders, or “flexi-tanks”, were pressure washed and repackaged into DOT approved heavy lift bags designed specifically to provide containment. Once packaged, the heavy lift bags were placed into clean, lined containers and stored for further investigation. Eight frac tanks, filled with a total of 130,489 gallons of non-contaminated transformer oil removed from the ship’s containers, remained at the Valdez Container Terminal. Field tests confirmed no presence of PCBs, a hazardous substance sometimes associated with transformer oil. Since the non-contaminated oil is a commodity, the product’s owner will sell it to the highest bidder in accordance with U.S. Customs and Border Protection regulations. A time frame for the sale will follow state of Alaska’s temporary storage requirement and any additional rules imposed by the Port of Valdez. Upon conclusion of the sale, the oil will be shifted from the frac tanks into approved containers for transport. Contaminated oil, oily water removed from the ship’s deck, oiled sorbent pads and personal protective equipment, and other waste from the response were to be disposed by Emerald Alaska Inc. in accordance with local, state and federal guidelines. The incident remained under investigation. Report with photo: http://www.uscgnews.com/go/doc/4007/1803083/Response-to-leaking-containers-aboard-BBC-Arizona-concludes-demobilization-begins-in-Valdez-Alaska#sthash.tgvry7WT.dpuf

Containers being reloaded after cleaning

Emerald Alaska Inc. personnel used a vacuum truck to remove oil from bladders within the freight containers from the "BBC Arizona" in Valdez on June 13, 2013. Once emptied, the bladders were removed and inspected and the containers cleaned of all traces of the oil. Unified Command consisting of the Coast Guard, Alaska Department of Environmental Conservation, City of Valdez, and Gallagher Marine Systems, LLC, was formed in response to oil found leaking from multiple bladders. Containers were being reloaded onto the foreship of the "BBC Arizona" after being cleaned in the decontamination area. Emerald Alaska Inc. personnel worked to ensure the deck of the vessel was cleaned and free of oil before the containers were returned. Report with photos: http://www.uscgnews.com/go/doc/4007/1802007/Photo-Release-BBC-Arizona-cleanup-continues-in-Valdez#sthash.wwU479Gk.dpuf

Oil removed from containers before decontamination in Valdez

Cleanup efforts continued in Valdez as responders offload, inspect and decontaminate containers of mineral oil from the "BBC Arizona", June 10-12, 2013. Oil removed from the containers was transfered to temporary storage tanks. Workers from North Star Terminal and Stevedore Company used a crane to position the containers upon a rack for cleaning underneath. Workers of the Emerald Alaska Inc. cleaned the bottom of the containers before Coast Guard personnel inspected the boxes to ensure all traces of oil was removed before the containers were returned to the deck of the cargo ship. Report with photos and video: http://www.uscgnews.com/go/doc/4007/1801035/Multimedia-Release-BBC-Arizona-cleanup-underway-in-Valdez#sthash.QxHtaMnk.dpuf - See more at: http://www.uscgnews.com/go/doc/4007/1801035/Multimedia-Release-BBC-Arizona-cleanup-underway-in-Valdez#sthash.QxHtaMnk.dpuf