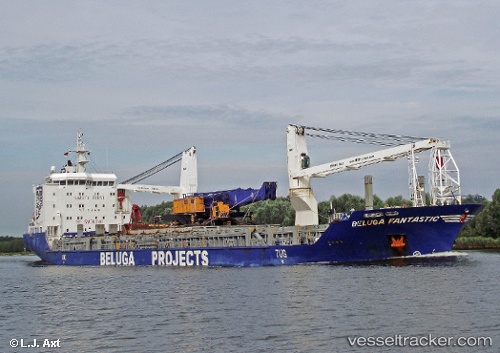 The "Beluga Fantastic" left Melbourne on Apr 15 bound for Port Kembla, ETA Apr 17, 2011, after the dispute regarding the Beluga Group debt to CSL Australia is somehow settled. The vessel was detained in Melbourne on behalf of shipping company CSL Australia.

The ship, formerly owned by German company Beluga, had been arrested on behalf of shipping company CSL Australia because Beluga owed more than $500,000 in charter fees. The "Beluga Fantastic" was one of four ships the troubled company recently sold to German shipping company Buss for about $15 million each. Now renamed "Fantastic", the dry cargo ship has been docked at Station Pier since March 11. The crew of 15 with European, Ukranian and Filipino nationalities is fully paid and has enough supplies. The "Fantastic" will remain in the port for the duration of court proceedings.

Lloyds List DCN reports that the German vessel Beluga Fantastic has been released from arrest at the Port of Melbourne. A spokesman for the Federal Court of Australia, which governs the Admiralty Marshals division, confirmed the 12,705dwt ship was released from custody late last Friday. Beluga Fantastic, owned by the German shipping group Beluga, had been arrested on March 17,