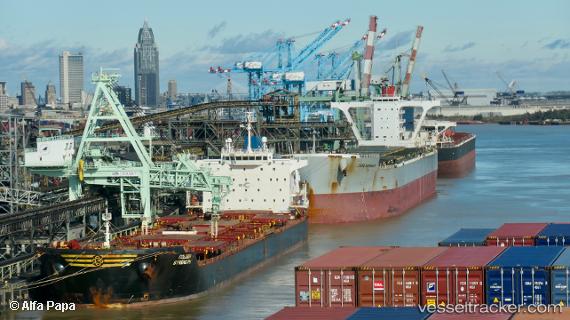 The Alabama State Port Authority (ASPA) and APM Terminals have approved a $49.5 million expansion of the container facility at the Port of Mobile. They will jointly deliver a Phase 3 expansion which will accommodate an annual throughput capacity of 650,000 teu with a new dock extension and an additional 20 acres of improved yard to accommodate new business opportunities. “The Phase 3 expansion enables us to stay well ahead of the growth pattern we’ve seen in the Port of Mobile, as well as add dock space to support the growing vessel sizes that are coming to the terminal,” said Brian Harold, managing director for APM Terminals Mobile. “It will help us maintain the efficiency levels our customers have come to expect, while also creating the extra capacity needed to support potential future economic growth in our market.”

Friday, October 6, 2017, Port Mobile, United States Due to the possibility of gale force winds (39-73mph) associated with Tropical depression 16 entering Port Mobile’s area of responsibility within 72 hours, the Captain of the Port yesterday (5 October) ordered Port Status WHISKEY for the entire Captain of the Port Zone Mobile. Port Status WHISKEY was set at 0800 on 5 October for GICWW, Port of Panama City, Port of Pensacola, Port of Mobile, Port of Pascagoula and Port of Gulfport. (GAC)

APM Terminals Mobile welcomes Arkansas-based global retail giant Walmart’s plans for a new International Distribution Center to be opened 15 miles from the port. The sixth of Walmart’s US international distribution centers, the Irvington, Alabama facility will handle Walmart’s import cargoes destined for Walmart’s Regional Distribution Centers in the American South. The recently completed Panama Canal lock widening project will permit vessels of up to 13,000 TEU capacity to transit the canal, bringing larger vessels and new opportunities to the deep-water terminal strategically located on the US Gulf Coast. The APM Terminals Mobile terminal opened in September of 2008. With a depth of 45 feet, the facility is currently equipped with two STS cranes capable of a 19-row reach. APM Terminals Mobile is adding two new super-Post Panamax STS cranes with expected delivery in June 2017, and is expanding the container yard by 20 acres as part of a $40 million infrastructure investment which will increase the terminal’s annual throughput capacity to 500,000 TEUs.