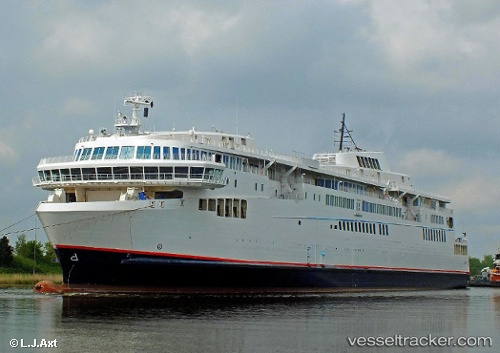 On Nov 1, 2019, at 3.30 p.m. the cargo m/v 'Danica Violet' (IMO: 8503967), enroute from Gdynia to Rostock, was in collision with the outgoing 'Berlin' on the Warnow adjacent to the Warnemünde Cruise Center. The freighter had lost control and suddenly veered to port, hitting the port side bow of the ferry which was bound to Gedser and had no chance to avoid the collision of the approaching freighter in the small fairway. The 'BErlin' returned to berth 55 in the Sea Port of Rostock after the accident. The 321 passengers were disembarked. The hull of the ferry was breached above the water line on three meters length. The foreship of the ship was deformed so much that at least three frames broke. The total damage, was currently estimated at approximately € 200,000. No one was injured, no pollution was reported. The 'Flunder' of the Baltic Taucherei- und Bergungsbetrieb, the company, which was chosen to repair the breach, went alongside the ferry. It was hoped by Scandlines to have the 'Berlin' operating again on Nov 2 at 3 p.m. The 'Danic Violet' docked at berth 37 in the seaport of Rostock. Ferry operator Scandlines recommended passenger customers to use the crossing from Rødby to Puttgarden, where the ferries were sailing according to plan. Trucks can be ferried aboard the 'Kronprins Frederik'. The police Rostock launched an investigation into the accident. The 'Berlin' left Rostock again on Nov 2 at 8 p.m. towards Gedser. The 'Danica Violet' sailed at 4.50 p.m., headed to Gdynia for repairs and docked in basin VII at the Stocznia Dock Yard on Nov 3 at 9.45 p.m. for repairs. German reports with photos: https://www.nnn.de/lokales/rostock/Warnemuende-Havarie-zwischen-Kuestenfrachter-und-Faehre-Berlin-id26203442.html https://www.rostock-heute.de/scandlines-faehre-berlin-kollision-frachter-rostock/109340?fbclid=IwAR2LNkQe6C2gQDrzo3uFUptv98Tky2RNmPXE5DVwnAbV8bD_YkE_TcEzwZ8

The "Berlin" will have to undergo an unplanned maintenance in a yard. The last departure from Rostock to Gedser will take place on July 16 at 7 p.m.The ferry entered the Lindoe Shipyard OSS in Vigeroe on July 17 at 6 a.m. for repairs. Rolls Royce, who built the thruster of the ship, delivered a reserve thruster from its store which was exchanged with one which had caused vibrations due to yet unknown reasons. The ship left drydock after the exchanged had taken place. Investigations showed that the old one in fact was damaged. The ship left Fayard on July 19 at 12.30 p.m. and returned to Rostock at 10 p.m. The first departure to Gedser was planned for 11.45 p.m.

Berlin sidelined due to technical problems

The "Berlin" had to be taken out of the Gedser-Rostock route in the night of March, 2, 2018, until March 3 due to technical problems Scandlines canceled the sailings from Gedser on March 3 at 02:30 a.m. 09:00 a.m. and 1:00 p.m. and from Rostock on March 2 at 11:45 p.m. and March 3 at 06:00 a.m. and 11:00 a.m. The "Copenhagen" continued sailings as scheduled. Alternatively, Scandlines recommended that both freight and passenger customers used the ferries from Rødby to Puttgarden.