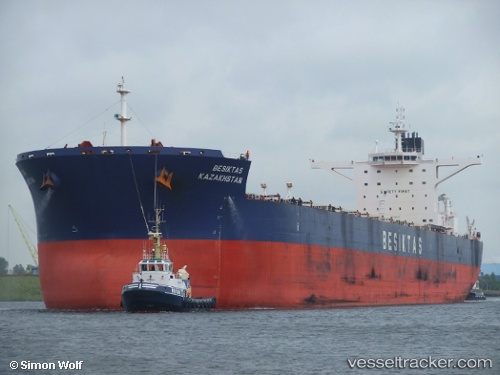 43 kilos of cocaine were found hidden aboard the "Besiktas Kazakhstan" on July 5, 2016, in the port of Carbonares. The drugs seizure was the result of a joint international operation, based on information, that drugs were to be trafficked on board of a merchant vessel loaded with coal. The ship had completed loading of her cargo at Puerto Bolivar on May 28. A thorough check across the vessel and underwater search had been conducted by Colombian Authorities prior to departure and the vessel had been found clear of drugs. The vessel commenced sailing towards port of Carboneras to discharge her cargo. After the arrival at Carboneras, cargo discharging operations commenced on the July 5. The Spanish Authorities boarded vessel on the July 6 in order to conduct a drug search. They found two wrapped packages containing total 50 kg of cocaine hidden in the rudder trunk. The Spanish Authorities confirmed that they had been following the vessel since the departure from Colombia and the packages had been placed by the divers at loading port. Company representatives, the P&I representatives and the lawyer were immediately involved with the case. Authorities declared upon completion of search and interrogation of crew that nothing was found to accuse the crew of being linked to the incident. Therefore, the case was considered closed for both the vessel and the crew. The vessel completed discharging operation and sailed from port of Carboneras on July 12.