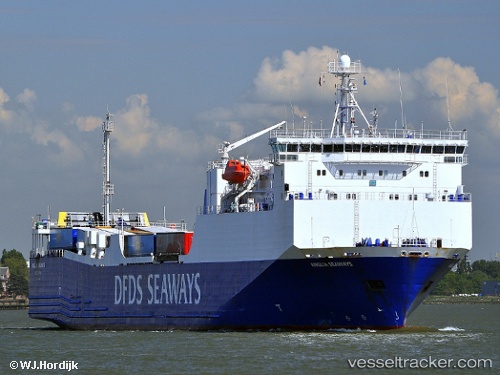 The Central Port Authority of Piraeus was informed in the evening ofo Sep 3, 2021, by the Master of the 'Blue Carrier 1' that during the departure from the new pier of Drapetsonas, the starboard side main engine could not be started. The ship was banned from sailing by the Port Authority, until the presentation of a certificate of seaworthiness by the classification society that monitors it.

An ongoing dispute between Russia and the European Union has resulted in the suspension of a Baltic Sea route operated by DFDS. The Danish-owned ro-ro ANGLIA SEAWAYS (built 2000) will stop its service between Travemunde in Germany and Klaipeda in Lithuania due to affected freight volumes. A spokesperson from DFDS told TradeWinds: “The unacceptable level of freight volumes has made us realise that this will not be a viable route during the dispute.” The spokesperson said the company does not expect the conflict to end any time soon, so it decided to suspend the service which was launched on 14 June. Customers will instead be offered capacity on the Kiel-Klaipeda route. He could not give precise figures of the financial effect the suspension will have. Earlier in August, Russia had imposed an import ban on foods from the EU. The Danish-owner – whose chief executive Niels Smedegaard is also President elect of the European Community Shipowners’ Association – still operates six sailings a week between Germany and Lithuania. Yesterday, it announced a second quarter profit of DKK 195m ($34.67m), raising its full year profit forecast. ANGLIA SEAWAYS will be redeployed between Rotterdam and the UK. Source : Tradewinds

Ferry operator DFDS Seaways is expanding its freight ferry services between Immingham in North East Lincolnshire and Rotterdam in Holland. The freight only ferry Anglia Seaways will be added to the freight route to “enhance capacity and frequency” from January 17, the firm said. Sean Potter, managing director of DFDS Seaways’ freight services in the UK, said: “In recent months, we have seen a good development in freight traffic to and from the Humber area and are acting on demand from our customers". http://www.yorkshirepost.co.uk/business/business-news/seaways_strengthens_fleet_with_freight_only_ferry_1_4125992