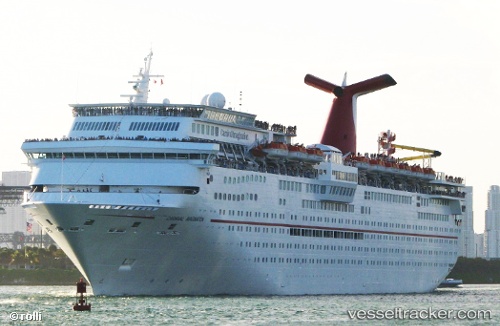 The US Coast Guard medevaced a 79-year-old man from the "Carnival Imagination" approximately 70 miles west of Ensenada on Nov 8, 2017. At approximately 8 a.m., the ship contacted the Coast Guard Sector San Diego’s Joint Harbor Operations Center watchstanders to report a passenger was experiencing heart-attack like symptoms. A Coast Guard Sector San Diego MH-60 Jayhawk helicopter crew was launched to medevac the man. At approximately 9:30 a.m., the Jayhawk crew arrived on scene, hoisted the passenger and took him to Scripps Memorial Hospital in La Jolla.

Coast Guard crews from Point Mugu helped evacuate an ailing man from a cruise ship about 6 miles south of Long Beach Harbor on Thursday evening (May 11). The Los Angeles-Long Beach sector of the Coast Guard was notified by the crew of the Carnival Imagination at 10 p.m. that a passenger, a 65-year-old man, was experiencing symptoms of a stroke. An MH-65 Dolphin helicopter crew was immediately launched from Coast Guard Forward Operating Base Point Mugu to conduct an emergency medical evacuation. The helicopter crew hoisted the passenger and took him to Torrance Hospital, where emergency medical services were awaiting.

An elderly woman who suffered a head injury was airlifted from cruise ship by a Coast Guard crew so she could be taken to a hospital early Monday, authorities said. Crews aboard a Carnival Imagination cruise ship reported to the U.S. Coast Guard that a woman had hurt her head after a fall and was having seizures, authorities said. A Coast Guard MH-60 Jayhawk helicopter was sent to the vessel, which was about 58 miles northwest of San Diego, about 2 a.m. A crew safely hoisted the woman into the helicopter an hour later, Coast Guard officials said. An awaiting ambulance at the Coast Guard headquarters on North Harbor Drive took the woman to a hospital. An update on her condition was not available. http://www.sandiegouniontribune.com/news/public-safety/sd-me-coast-guard-20161024-story.html