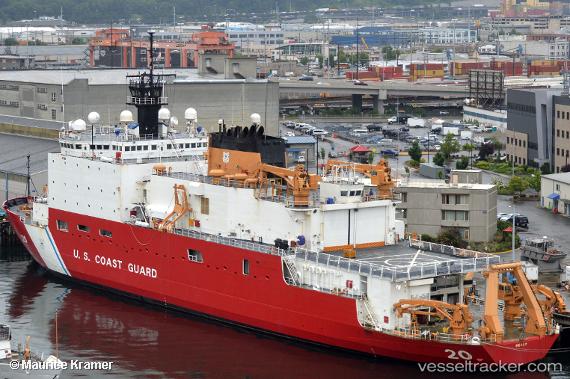 The 'Healy (WAGB-20)' suffered a fire in one of the ship’s main engines on Aug 18, 2020, 60 nautical miles off Seward, Alaska, en route to the Arctic. The electrical fire was reported at 9:30 p.m. A fire team disconnected the affected motor, and the fire was confirmed extinguished by 9:56 p.m. The cause of the fire was currently unknown. Due to the fire, Healy’s starboard propulsion and shaft were no longer operational, and the ship was transiting back to its homeport in Seattle for further inspections and repairs. Prior to the fire, the 'Healy' completed a 26-day patrol in support of Operation Arctic Shield along the U.S.-Russian Maritime Boundary Line, and in the Arctic. On Aug. 15, the 'Healy' was in Seward and embarked 11 scientists before departing on Aug. 18 to conduct science operations in the Arctic. As a result of the fire, all Arctic operations have been cancelled.

U.S. Coast Guard Cutter Healy arrived at the North Pole September 5, 2015, becoming the first U.S. surface ship to do so unaccompanied. Healy’s arrival to the North Pole marks the fourth time a U.S. surface vessel has ever reached the North Pole, and the first since 2005. The Seattle-homeported Healy departed Dutch Harbor, Alaska August 9 with a crew and science party of 145 people in support of GEOTRACES, a historic international effort to study the geochemistry of the world’s oceans. This expedition id funded by the National Science Foundation (NSF) and is focused on studying the Arctic Ocean to meet a number of scientific goals, including the creation of baseline measurements of the air, ice, snow, seawater, meltwater and ocean bottom sediment for future comparisons. http://www.marinelink.com/news/reaches-cutter-guard397533.aspx

UNEAU, Alaska — The crew of the Coast Guard Cutter Healy, a polar icebreaker, on July 12 rescued a man aboard a sailboat trapped in Arctic ice approximately 40 miles northeast of Barrow. The crew of the Healy broke a 12 mile path through the Arctic ice with the sailboat, Altan Girl, in tow and led it to open water. The Healy crew conducted a safety inspection of the mariner's vessel to ensure the vessel was seaworthy and that all the required safety equipment was on board. The mariner intends to sail to Barrow to resupply and await safer weather conditions before continuing his journey. The crew of the Healy will return to their National Science Foundation-funded research mission. Coast Guard 17th District watchstanders in Juneau were contacted by North Slope Borough Search and Rescue Monday who reported that a man, sailing his 36-foot sailboat from Vancouver, Canada, to eastern Canada via the Northwest Passage, needed assistance after his vessel had become trapped in the ice.