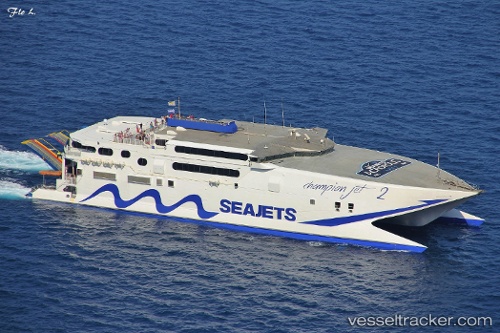 The starboard side stern ramp of the 'Champion Jet 2', operating the route Piraeus-Sifnos-Seriphos-Milos-Kimolos-Folegandros, broke off and fell down in the port of Piraeus during the mooring operations on Sep 22, 2021, at 6.40 p.m. off berth G9. Due to the incident the passengers had a long wait before being able to disembark. On Sep 23 at 7.35 a.m. the ship left port again after troubleshooting, headed to Seriphos. Report with video: https://www.protothema.gr/greece/article/1163756/deite-video-espase-katapeltis-ploiou-sto-limani-tou-peiraia-talaiporia-gia-tous-epivates/AMP/

The Port Authority of Syros was informed on Nov 18, 2020, at noon by the Captain of the 'Cmampion Jet 2' about a malfunction of the port side stern ramp upon the departure of the ship from the port to Piraeus. The ferry with 71 passengers and 21 cars on board was serving the scheduled route from Piraeus to Syros, Mykonos, Naxos, Thira and back. After an inspection of the ship by the local ship inspection board, it was found that a pulling rope was broken, resulting in the malfunction of the ramp. The ferry was initially banned from sailing by the Port Authority of Syros. After the presentation of a certificate of class maintenance by the attending classification society the ship was alloewd to depart towards Piraeus.

The Heraklion Port Authority was informed in the afternoon of Sep 26, 2019, by the captain of the 'Champion Jet 2', which was operating a scheduled itinerary from the port of Thira to the port of Heraklion, about a damage of a starboard side main engine. The ship with its three remaining engines headed to the port of Heraklion, where it safely disembarked the 625 passengers, 14 vehicles and five bicycles. The Heraklion Central Port Authority detained the ferry until the damage was repaired and a certificate of seaworthiness was provided by the monitoring classification society. The ship left the port again on Sep 27 at 7.45 a.m. and arrived in Thira at 10.20 a.m.