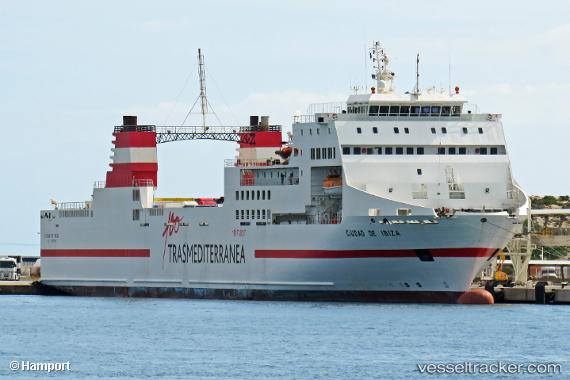 Oliver Design has upgraded Trasmediterránea’s 219-passenger ro-ro ferry Ciudad de Ibiza in just 20 days. The team spent 10 days working onboard the vessel during her crossing from Trinidad & Tobago in the Caribbean to Algeciras in Spain, before completing the rest of the refit at the Gibdock Shipyard in Gibraltar. During the project, Oliver Design refitted the ferry’s self-service restaurant, upgraded its bar, renovated a 95-passenger lounge, updated 29 interior and exterior guest cabins and the adjoining corridor, and refurbished the reception area, stairs, public toilets and the crew lounge. http://www.cruiseandferry.net/articles/oliver-design-upgrades-trasmediterr225nea-ferry-in-record-time#.WXBxnEdt69I

Black smoke emberged from the "Ciudad de Ibiza" on June 22, 2017, off the coast of Sant Joan in Portinatx. The cause of the smoke was a broken down engine with which the ferry sailed, but there was no fire on board. The ship which had sailed from Ibiza to Valencia at noon and safely berthed at the TCV Terminal at 9.50 p.m. with the remaining engine. Spanish report with photo and video: https://www.noudiari.es/2017/06/susto-la-humareda-negra-barco-pasajeros-frente-la-costa-portinatx/