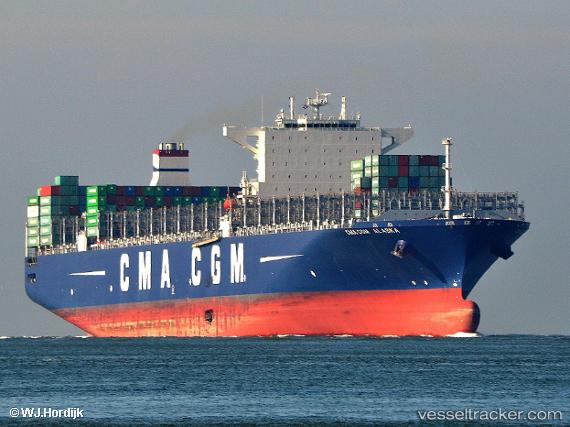 On Oct 27, 2018 at 9:45 a.m. the CROSS Joburg was informed that a 37-year-old sailor from Poland, sailing aboard the "CMA CGM Alaska" needed a medical consultation. The ship was 45 nautical miles west of Le Havre. Immediately, the CROSS Jobourg, after liaising with the Toulouse Maritime Medical Consultation Center (CCMM) and the maritime coordination SAMU (SCMM) who recommenced a medical evacuation, alerted a Dragon 76 helicopter of the civil security based in Le Havre. After taking on board a medical emergency service team, it took off towards the container ship which is only 16 nautical miles from Le Havre. The patient was prepared by the medical team for evacuation, then hoisted and transferred to the Jacques Monod hospital. in Le Havre, where he was deliverd at 11:40 a.m.

On Nov 2 around midday the "CMA CGM Alaska" was towed from the Keppel Verolme (Botlek), via Caland Canal to ECT in the Amazone Port in Rotterdam, after the repair of collision damage. Involved were the tugs "Fairplay I", "Fairplay 13", "Fairplay 23" and "Fairplay 26". Photo report: http://www.tugspotters.com/dev/index.php?itemid=41678

The "CMA CGM Alaska" was moved to the Delta Terminal Rotterdam on Oct 14, 2011. On Oct 16 the tugs "Fairplay 1", "Fairplay 26" and "Fairplay 27" towed the casualty out of the Amazone harbour where most of the containers had been unloaded at ECT in order to get the punctured hull higher. Then the ship sailed with own power via the Beear Canal and the Maas towards the Keppel Verolme Yard in the Botlek where it moored in basin 2. Photo report: http://www.tugspotters.com/dev/index.php?itemid=41248#more