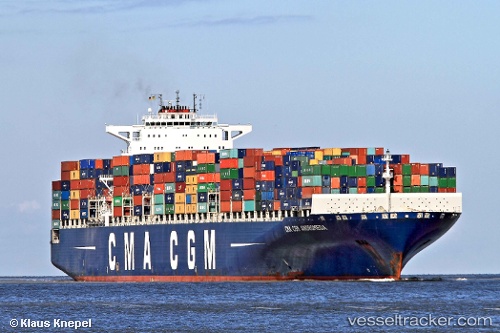 The first international container ships began arriving in Iran this week after the nuclear deal between Tehran and world powers, yet many ship owners remainf wary of resuming business until sanctions are removed – still some months away. In one of the first signs of change, the world’s third largest container shipping group, France’s CMA CGM, said on Monday it would restart services to Iran in early August. The UK-flagged CMA CGM Andromeda container ship arrived in Iran’s Bandar Abbas port on Thursday, ship tracking data on showed. CMA CGM declined further comment. Taiwanese container line Evergreen, the world’s fifth biggest player, said it had also resumed calls to Bandar Abbas and its first vessel arrived at the port on Wednesday.

An Iranian official says the French CMA CGM shipping company has chosen southern Iranian Shahid Rajaei port as the port of call for its container ships. Ebrahim Idani, director general of Hormozgan Ports and Maritime Department, told reporters on Wednesday that the development has come after Iran and the P5+1 group of countries clinched an agreement over Tehran’s civilian nuclear program in Vienna last week. According to the agreement, all economic and financial sanctions against Iran will be removed through the Security Council resolution, which was adopted on Monday. In addition, all bans on Iran’s Central Bank, shipping, oil industry, and many other companies will be lifted. The Iranian official said France’s CMA CGM is the world’s third biggest shipping company which transports container goods and its first container ship will berth at Shahid Rajaei port in early August. “The container ship, which will call at Shahid Rajaei port is the CMA CGM Andromeda. It is 363 meters (m) long with a draft of 15.5 m, which can carry 11,500 TEU of containers. It will unload its containers at the second terminal of Shahid Rajaei port,” he added. Idani stated that the Andromeda has started its journey from the Far East and is bound for the Persian Gulf. “It has chosen 10 big ports for berthing along its way and since Shahid Rajaei port enjoys international standards for accommodating big vessels, the French ship has chosen it as one of its ports of call,” he added. The official noted that investments made in the development of Shahid Rajaei port in the past years have made it a suitable destination for giant container-carrying vessels. Shahid Rajaei port is located 23 kilometers west of Bandar Abbas, the capital city of southern Iranian province of Hormozgan. The port is equipped with 18 gantry cranes and 41 docks, which make it the biggest and most modern container port in Iran. Source: PressTV