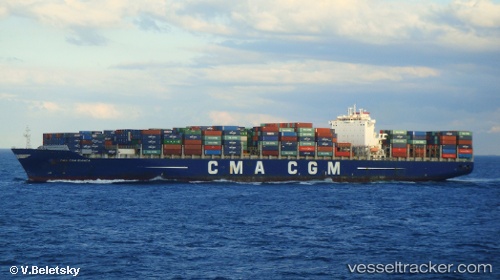 On Oct 3, 2015, the CROSS Réunion was contacted by the "CMA GGM Bianca" after the captain fell is seriously ill. After consultation with the doctor of SMUR, it was decided to medevac him by helicopter. Given the medical emergency, the CROSS request the assistance of FAZSOI which decided to dispatch a Panther 36F Nivôse helicopter at 8 p.m. to the ship which was 10 miles off the coast of La Réunion. A rescue swimmer and a medical team were airlifted aboard the container ship. The master was hoisted and taken to the hospital in Saint-Denis. After an hour of flight, the helicopter landed at the Bellepierre University Hospital.

Danaos Corp. expands its boxships fleet to a total of 58 ships

Danaos Corporation (NYSE: DAC), a leading international owner of containerships, announced that on October 26, 2011, it took delivery of one more newly built containership, the CMA CGM BIANCA, expanding its operational fleet to a total of 58 containerships aggregating 282,619 TEU, the Company said Tuesday. The CMA CGM BIANCA, built at Shanghai Jiangnan Changxing Heavy Industry, has a carrying capacity of 8,530 TEU, is 335 meters long, 42.8 meters wide and has a speed of 25.80 knots. The CMA CGM BIANCA has commenced its 12-year time charter at a fixed charter rate immediately upon delivery.