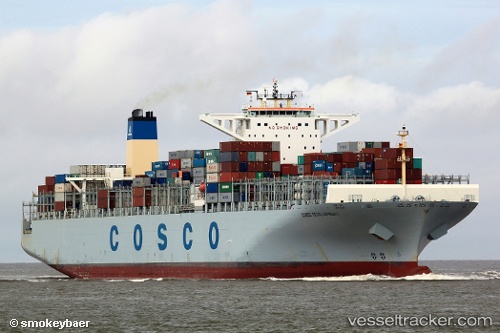 The "COSCO Development" allided with the Agua Clara Lock wall on July 10, 2019, while transiting the Panama Canal enroute from Balboa to Colon. The lock’s integrity wasn’t compromised, a stone staircase was the only construction which sustained damages. The ship did not sustain damages and after a brief stop at the lock resumed the canal transit and reached Colon in the afternoon of July 10.

Anybody hoping to catch a glimpse of the massive container ship COSCO Development as it arrives in Hampton Roads early Monday might want to bring some coffee, maybe a blanket and, if you can find any, night-vision goggles. The biggest ship to pass through the expanded Panama Canal since it opened nearly a year ago, as well as the biggest ship ever to call on the U.S. East Coast, is expected to knock on the door of the port – its first stop since leaving Panama – about 2 a.m. Monday, according to the Coast Guard. It’s expected to pull up to its berth at Virginia International Gateway in Portsmouth about 4:30 a.m. http://pilotonline.com/business/ports-rail/biggest-ship-ever-to-visit-east-coast-coming-this-week/article_92c4db59-39b7-51e9-85c0-156626727b04.html

The COSCO Development, a huge container vessel, on Tuesday became the largest ship to date to traverse the newly expanded locks of the Panama Canal. The ship, which is 366 meters (1,200 feet) long and 48 m (157 ft.) wide, can transport up to 13,435 containers and is en route from Asia to the US East Coast. It began its journey through the Canal early Tuesday morning on the Pacific side at the Cocoli locks, waterway authorities said. Panama Canal Authority administrator Jorge Luis Quijano said that if all the containers the ship is carrying were laid end to end the resulting chain would measure about 80 kilometers (50 miles). http://aldianews.com/articles/business/largest-vessel-date-traverses-expanded-panama-canal/47814