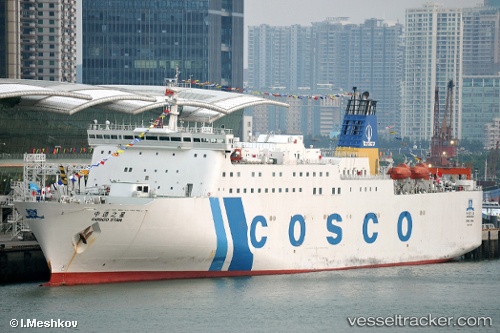 The 'Cosco Star' was in collision with a port tug at Taichung port in the evening of Nov 27, 2019. The ferry was leaving Taichung with 52 passengers on board, bound for Xiamen. She suffered a dent at the portside bow above the waterline. The tug was severely damaged, suffering hull breaches, a broken mast and a destroyed funnel. The 'Cosco Star' resumed the voyage into the Taiwan Straot after inspections. Greek report with photo: https://e-nautilia.gr/sigkroush-epivathgou-ploiou-me-rumoulko/

Following in the footsteps of Keelung and Taichung, Taipei Harbor will launch a direct passenger service between Taiwan and China on May 13, Taiwan International Ports Corp. (TIPC) said yesterday. The company said a passenger-cargo dual-use ship operated by Taiwan-based Wagon Shipping Co. will sail from Taipei to Pingtan in Fujian province and back once a day five days per week. The ship will have a capacity of 800 passengers, and the trip will take 2 hours and 45 minutes each way, the company said. The Cosco Star, operated by the China-based Cosco Group, now sails between Xiamen and Taichung and Xiamen and Keelung once a week. More of a cruise liner with a capacity of around 680 passengers, the Cosco Star is not a high-speed ship and takes about 13 hours to sail between Taiwan and China's southeastern coast. More at http://www.chinapost.com.tw/taiwan/local/taipei/2013/04/28/377211/Taipei-Harbor.htm

The first roll-on, roll-off service between Taiwan and mainland China is now operating, signalling further liberalization of transport across the Taiwan Straits, the Journal of Commerce reported. The Cosco Star sailed from the Port of Xiamen in Fujian province on Thursday carrying heavy industrial vehicles, including a Caterpillar excavator. Direct cross-Straits cargo flights and shipping between the mainland and Taiwan have only been allowed since 2008 because of security reasons. Previously, flights and most ships had to detour via Hong Kong or Japan. "It is a major breakthrough for vehicle transportation across the Taiwan Straits," said Andrew Hu, a deputy general manager at operator Cosco Xiamen International Freight. "We expect that Taiwan authorities will allow more types of vehicles to be transported through the shipping line, such as private cars.” Source : PortNews