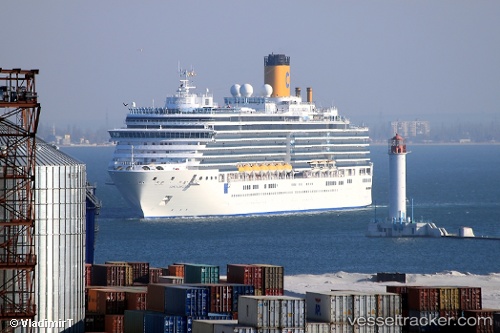 The 'Costa Deliziosa', the last ship at sea operated by a major company, has docked in the port of Genoa on April 22. She had departed Venice on a round-the-world voyage on January 5. Rough seas outside Genoa forced the ship to anchor outside the port on April 21. It finally docked at 1:30 p.m. There were 1,519 passengers on board and 898 crew members on board. The vessel was originally due to return to Venice on April 26 after a 113-day voyage. It was cleared to keep sailing even after Costa suspended other sailings in March. Its itinerary was changed to avoid Asian ports. Until this week, no one had left the ship in more than a month. Some passengers disembarked when the ship stopped in Perth on March 16. The only passengers allowed to step ashore were those with booked flights home. On April 20, the ship docked in Barcelona, and about 300 people left the ship. The remaining passengers were American, Italian and French. One passenger died on board on April 6, but the death was not believed to be related to coronavirus. A test was due to take place as a precaution.

Cruise ship has deceased person on board

There was a deceased person on board the 'Costa Deliziosa' which was moving towards the port of Genoa with an ETA as of April 21. The victim died of a heart attack on April 6, and the doctors on board ruled out that it was a coronavirus infection. Passengers and staff were all in good health and the ship was considered absolutely uncontaminated. It was, however, likely that in Genoa maritime health care would decide to carry out a swab on the body. The last stop of the ship was on March 14 in Albany, followed only by technical stops and the refusal by the French authorities of tdocking in Marseille. About 1.600 passengers and 900 crew members were on board. The ship, which left Venice on Jan 5 where it was due to return on April 26, will be the fifth cruise that will dock in Ligurian ports since the beginning of the emergency. Once the maritime health agency has decidde whether or not to subject the body of the deceased to an autopsy, the disembarkation operations may start.

Passengers to be disembarked in Barcelona and Genoa

The health situation on board the 'Costa Deliziosa', which has 1814 passengers and 898 crew members on board, did not pose any public health problems, and no cases of Covid-19 have been reported, so that as an exceptional case - despite the fact that Spanish ports have been closed to cruise ships - the vesseö thanks to the collaboration with the Spanish authorities, can make a stopover in Barcelona on April 20. Spanish nationals and permanent residents will disembarked and return home. The ship then will continue its journey towards Genoa, where it was due to arrive in the evening of April 21. The disembarkation of passengers of other nationalities, including Germans, was scheduled for April 22 in the morning. With the French authorities refusing permission to disembark French guests along with passengers from other nations, Costa will organize the transportation of the remaining guests from Genoa towards their final destinations.