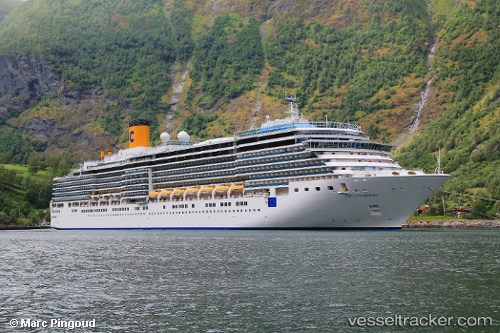 On May 17, 2022, the 'Costa Luminosa', en route from Cadiz to Las Palmas, requested the medical evacuation of a one-year-old child. The CCS Cadiz of Salvamento Marítimo mobilized the SAR vessel 'Salvamar Suhail'. The whole family of four, among them two adults and two children, were taken off and transported to to Puerto América.

In the night of March 20, 2022, the SAR helicopter Helimer 205 was mobilized by the CCS of Salvamento Marítimo in Valencia to carry out the medical evacuation of a crew member from the 'Costa Luminosa', en route from Barcelona to Lisbon. The patient was hoisted aboard and transferred to the Manises airport, where an ambulance was waiting. Video: https://twitter.com/i/status/1505944644819075073

A federal appeals court on Aug 19, 2021, rejected a potential class-action lawsuit stemming from a COVID-19 outbreak on the 'Costa Luminosa', that had sailed from Florida, ruling that the case needed to be filed in Italy. A three-judge panel of the 11th U.S. Circuit Court of Appeals upheld a district judge’s decision to dismiss the lawsuit filed by Paul Turner, a Wisconsin resident who was a passenger on the cruise ship, which left Fort Lauderdale on March 5, 2020, for a transatlantic voyage. The ship’s owner, Italy-based Costa Crociere, and a subsidiary, Costa Cruise Lines, argued that Turner’s cruise ticket included a requirement that any legal disputes shall be instituted only in the courts of Genoa, Italy, to the exclusion of the courts of any other country, state or nation. Turner, who became infected with COVID-19 on the cruise, filed the lawsuit in April 2020 in federal court in South Florida. The appeals court rejected a series of arguments raised by Turner, including arguments related to the difficulty of traveling to Italy for court proceedings during the continuing pandemic. “Even assuming that travel difficulties and risks associated with COVID-19 are any less foreseeable than medical difficulties that would attend more standard personal injuries that were plainly foreseeable when Turner agreed to the forum selection clause (in the ticket), Turner still has not met his burden of proving that pursuit of his claims in Italy would subject him to fundamental unfairness. The reason is basic: He has not established that he would have to travel to Italy in order to pursue his case. The defendants produced an affidavit from an Italian attorney explaining that Turner would not be required to attend routine proceedings in person and that even for those events that required attendance, he could possibly either arrange for appointment of a special attorney to attend on his behalf or request that the event take place in the United States via international rogatory (a process that involves making a request to a foreign court).” The lawsuit alleged that the cruise line knew that COVID-19 was a risk before leaving Fort Lauderdale, in part because an Italian passenger on a prior voyage in late February 2020 had been evacuated from the 'Costa Luminosa' in the Cayman Islands and tested positive for COVID-19 before ultimately dying. Three days into Turner’s cruise, the ship docked in Puerto Rico because an elderly Italian couple needed to be hospitalized because of COVID-19 symptoms, Turner’s attorneys wrote in a brief filed at the Atlanta-based appeals court. The ship then proceeded across the Atlantic, ultimately requiring all passengers to quarantine. When passengers got off the ship on March 19, 2020, 36 tested positive for COVID-19. But in their arguments to the appeals court, attorneys for the cruise line focused on the terms of Turner’s ticket that required hearing legal disputes in Italy. “Plaintiff had ample opportunity to review the terms and conditions of the contract,” the cruise line’s attorneys wrote in a brief. “He received a link to a copy of the contract in five separate email confirmations from Costa Crociere, and the contract was also publicly accessible on Costa Crociere’s website. Additionally, Costa Crociere required all passengers to download their cruise ticket and accept the terms of the contract as a prerequisite to boarding the ship, and plaintiff accepted the terms of the contract prior to the cruise.”