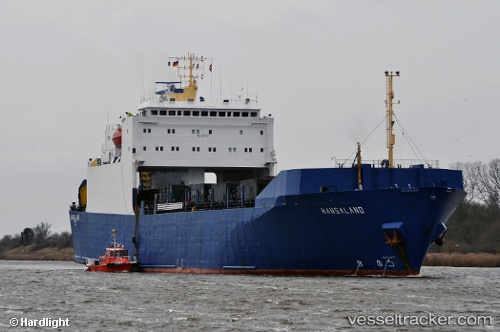 A salvage operation was started after the "Coyhaique" on July 3, 2019, ran aground near Huichas island in the Moraleda channel, near Puerto Aguirre, Aysén Region, on its voyage from Puerto Chacabuco to Puerto Montt. The ship with 20 passengers and 18 crew members on board was listing to port, and while all of them were taken ashore by the motor boat "Alexis" and transferred to Puerto Aguirre in good health, one officer died for causes which were investigated. The ship was protected by the patrol ships "Ortiz" and "Micalvi" together with the LSG "Aysén" and the "LPM 4411" of the Chulean Navy. The salvors were next having to contend with the 15 cattle trucks on deck. On July 7, 17 of the 244 cattle had already died. The ship’s hull was breached and its engine room flooded with some oil pollution. Salvors were trying to stabilize the ship before working out how best to take them to safety, likely via a ship-to-ship transfer. Food and water were being delivered the cattle through the top of the trucks. After one week the Oxxean SA refloated the ship aling with more than 200 cattle in an operation with about 90 technicians and workers as well as six support vessels. They were able to control the water ingress and seal the leaks, allowing the ship to be towed to Puerto Laguna seven km south of the grounding position which offered better conditions against the inclement weather for temporary repairs on July 10 and then complete the rescue of the animals whith were taken aboard three vessels to Puerto Chacabuco. Spanish reports with photos: http://diarioaysen.cl/2019/07/17/ http://www.mundoacuicola.cl/new/2019/07/15/oxxean-realiza-salvamento-de-ferry-coyhaique-y-200-animales-a-bordo/ https://www.eldinamo.cl/nacional/2019/07/15/empresa-maritima-realiza-salvamento-del-naufragado-ferry-coyhaique/ https://www.biobiochile.cl/noticias/nacional/region-de-aysen/2019/07/03/descartan-derrame-de-combustible-tras-varamiento-de-embarcacion-en-aysen.shtml https://www.biobiochile.cl/noticias/nacional/region-de-aysen/2019/07/10/remolcan-a-lugar-seguro-ferry-que-encallo-en-aysen-con-250-vacunos-sag-evalua-sancionar-a-empresa.shtml https://rtvnoticiaschile.cl/index.php/2019/07/10/remolcan-a-lugar-seguro-ferry-que-encallo-en-aysen-con-250-vacunos-sag-evalua-sancionar-a-empresa/ https://www.eldivisadero.cl/noticia-52801

Ro-ro cargo ship COYHAIQUE with 19 passengers and 18 crew on board ran aground near Huichas island, Aysen region, Chile, while en route from Puerto Chacabuco to Puerto Montt, at around 0200 LT Jul 3. Reportedly, one crew or pilot died, rumored suicide. Hull was breached, engine room flooded. All passengers and crew were evacuated. The ship is having on board unknown number of vehicles.