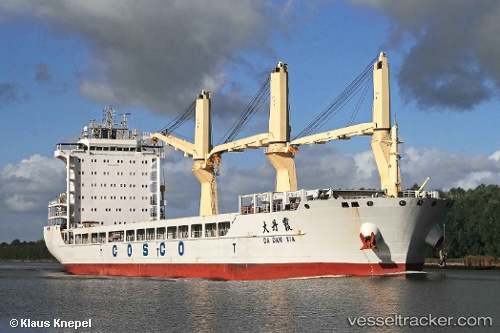 Colombia has authorized the "Da Dan Xoia" to set sail after it was caught carrying 100 tonnes of explosives to Cuba illegally, the prosecutor's office said on Apr 21, though it continued to hold the vessel's captain pending a criminal investigation. A Cartagena-based judge authorized the ship to depart after nearly two months because Colombian authorities do not have the logistical capacity to unload, store or destroy the weaponry found aboard. The ship was detained on Feb. 28 after docking in the coastal city of Cartagena on the Caribbean coast. Inspectors found the explosives plus 2.6 million detonators, 99 projectile heads and around 3,000 canon shells on board. The documentation presented by the crew said the ship was carrying grains. China's Foreign Ministry said the ship was transporting regular military supplies to Cuba as part of its trade and military cooperation with the communist-run island and that it had not violated any international norms. The producer of the cargo, Norinco, is China's biggest arms maker. The recipient was stated as importer Tecnoimport in the Cuban capital Havana.

The captain of thwe "Da Dan Xia" has been arrested in Cartagena, charged with arms trafficking for transporting undocumented large-caliber munitions. The Chinese national Wu Hong, was captured after authorities found 100 tonnes of gunpowder and 3,000 artillery shells among other munitions. The captain was to appear before a judge in Cartagena on Mar 4. The vessel was seized on Feb 28 after authorities discovered the unregistered materials in eight shipping containers during an inspection. Around 100 tonnes of gunpowder, 2.6m detonators, 99 projectiles and around 3,000 cannon shells were found. The documentation presented by the ship’s crew made no mention of the ammunition on board and instead listed the contents as chemicals and spare parts. The documentation that the captain had in regards to the merchandise that was being transported did not correspond to what was found. After stopping in Cartagena the vessel was bound for Barranquilla and then to Havana. The owner company officially listed itself as an importer of machinery and industrial products. The supplier was listed on the crates as Norico, a Chinese manufacturer of machinery and chemical products, as well high-tech defense products. Report with photos: http://www.theguardian.com/world/2015/mar/03/colombia-arrests-ship-captain-ammunition-cuba

China's foreign ministry said on Wednesday that a ship detained in Colombia for illegally transporting arms and operated by China's largest shipping group was involved in "normal trade cooperation". Ministry spokeswoman Hua Chunying said the ship was carrying ordinary military supplies to Cuba and was not in violation of any international obligations. The Da Dan Xia, operated by Cosco Shipping Co Ltd , was headed for Cuba when it was stopped on Saturday in the northern port of Cartagena, on the Caribbean coast, after the arms were detected during an inspection. — Reuters http://www.saudigazette.com.sa/index.cfm?method=home.regcon&contentid=20150304235779