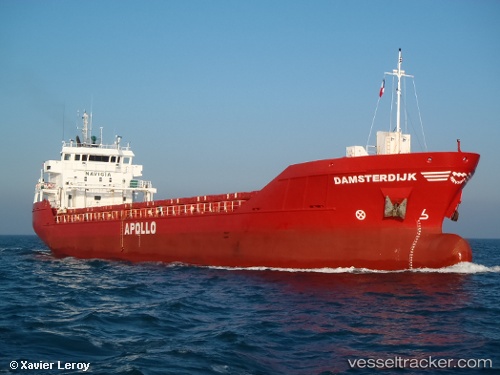 Poor communication and a tired sailor were the main causes of a fatal accident on the "Damsterdijk", the Dutch Safety Board wrote in a report on the accident, which took place in the port of Ipswitch in October 2019. A 57-year-old Indonesian man was killed in the accident. The cook, together with a trainee, had handled the two stern mooring ropes while moving the ship. One of the mooring lines broke after having got caught in the ship's propeller during this maneuver. The man was hit and suffered severe injuries to his left leg and presumably internal injuries. Initially, he was conscious, but when the ambulance arrived 40 minutes later, he was already unconscious. The sailor died later that day in a hospital. According to the investigation council, the accident had several causes. For example, the mooring and unmooring procedure prescribed that the responsible sailor on the aft deck had to supervise the procedure and speak with the captain. But because the sailor (not the same person as the deceased man) also had to operate a mooring line himself, he lost the overview. He sailor did not see that the other man was in a dangerous area should the mooring line break. This area was also poorly indicated on the ship. The combination of tasks also applied to the deceased, because he combined his own work with giving instructions to an inexperienced trainee, for whom the work on the aft deck was new. The victim also did not have a walkie-talkie and the supervisor. He was out of sight and earshot, making him unaware of what was happening on the quarterdeck. In addition, the responsible sailor did not have sufficient hours of rest prior to the incident. According to the Dutch Safety Board, this may have influenced his actions in the maneuver. In addition, according to the Board, there was no "clean working deck". The lines were shot loose on deck. As a result, the lines ran unimpeded and at high speed into the water.

A crew member of the 'Damsterdijk' died on board the ship at Ipswich in the morning of Oct 2, 2019. He suffered severe legs injures and was taken to hospital where he died later. Tha accident happened during mooring operations. The ship had arrived from Ceuta and berthed at the Cliff Quay.