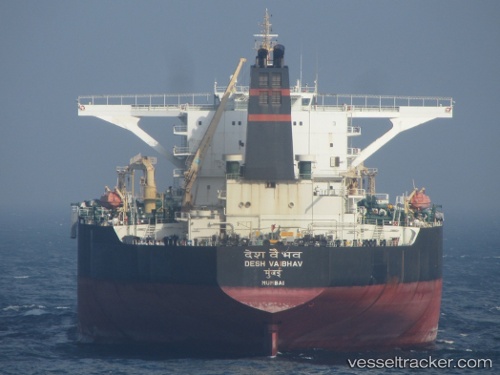 All the crewmembers who abandoned the "Desh Vaibhav" after a tank explosion have reboarded the ship, and the tanker will soon be headed for port. SCI asserted that it was fully manned and operational. The ship was drifting in the Gulf of Oman, 75 miles off Muscat, after on Aug 14 at 9.35 a.m. it suffered an explosion in a cargo tank. The fire was quickly extinguished with assistance from the Omani Navy, but three individuals were left missing and one was flown ashore for medical treatment. Conflicting accounts of the crew's status emerged on Aug 15: SCI said in a statement that two casualties were reported and sent ashore, and one injured crewmembers is currently being treated at a hospital in Muscat. However, UAE media reported that three crewmembers were rescued by good samaritan ships and had been hospitalized in Oman. Report with photo: https://www.maritime-executive.com/article/vlcc-desh-vaibhav-s-missing-crewmembers-rescued#gs.GiAIY60 https://pbs.twimg.com/media/Dkj5FSGXcAEQzzq.jpg

Tanker on fire off Oman

The "Desh Vaibhav" caught fire following an explosion on Aug 14, 2018, at 08:45 a.m. 60 miles northeast of Muscat. The lifeboat has been lowered, and rescue operations were underway for four crew members who had jumped into the water. The fire also injured one crew member which was taken to shore aboard a rescue helicopter. Several supporting vessels were assisting the rescue operations, among them the "Arva Spirit", "Jag Lavanya", "Desh Vishal", an unnamed Maersk container vessel, an Omani warship and the Iranian Navy. The tanker was sailing in ballast from Halul Island to Fujairah. IT had previously been chartered by Reliance to ship 270,000 tons of crude from the Persian Gulf on July 27 to Jamagar. The vessel was next to take on board another 270,000 mt cargo of crude from Ras Tanura on August 15 to Kochi for BPCL. While the fire was now out, the hull was still being cooled with water cannons to prevent the fire from flaring up again.

A VLCC owned by Shipping Corporation of India (SCI) which was detained by Singapore authorities last week, has been released. The Desh Vaibhav, which is chartered by Reliance Industries Ltd, has returned to its voyage to the Persian Gulf. Local authorities didn’t reveal the reason of the arrest, but confirmed that the issue has been sorted out. [26/09/13]