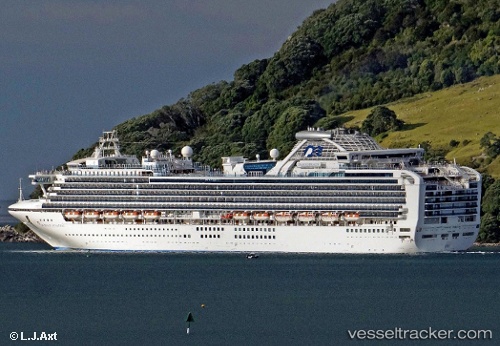 On May 16 the 'Diamond Princess“ finally left the waters of Yokohama and headed to Malaysia. It was bound to Port Klang with an ETA as of May 27. All cruises with the ship have been cancelled until Oct 1. It had been anchored off Yokohama since Feb 3 when an 80 year old passenger was tested positive for the new coronavirus. Only on March 1 the evacuation of the quarantined ship was completed when captain Arma went frmo board. Among the 3711 people on board - 2666 passengers and 1045 crew, 712 were infected with COVID 19 during that time, 13 of whom died. Four more were still in a critical state in hospital.

All 80 Filipinos infected with the new coronavirus aboard the 'Diamond Princess' returned back to the Philippines as of March 31. They were successfully treated and discharged from hospitals in Tokyo., nearly two months since the 'Diamond Princess' was quarantined off a port in Yokohama on February 5, after a passenger who disembarked in Hong Kong tested positive for the virus. The last Filipino crew member who had tested positive for the coronavirus was discharged from the hospital onMarch 31. There were a total of 3,700 people onboard the ship, including 531 Filipino crew members and 7 Filipino passengers. On February 25, 445 Filipinos from the ship returned to the Philippines.

Cruise ship to be fitted out for new cruises after quarantine

The 'Diamond Princess' has left a pier in Yokohama port on March 25 after nearly two months of quarantine. The ship was scheduled to be put into service again in mid-May. The ship’s departure was possible after disinfection work was completed and Yokohama Quarantine Station issued a quarantine certificate the same day. The ship had entered the port on Feb. 3. Of a total of 3,711 passengers and crew members, including passengers who got off the ship earlier, 712 have tested positive for the virus and 10 have died. After leaving the Daikoku pier the ship will berth at another pier in the port to receive the items necessary to resume cruise services — such as mattresses, linen supplies and interior accessories from a Mitsubishi Heavy Industries Ltd. factory. On May 16, the vesseö was due to begin an eight-day cruise visiting the cities of Kochi, Hiroshima, Matsuyama and Miyazaki in western Japan, as well as Busan in South Korea. The tour will start and end at Kobe port, however, depending on the situation.