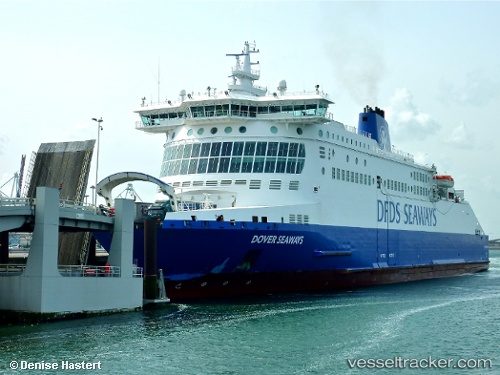 Damen Shiprepair Dunkerque is assisting DFDS Seaways, northern Europe’s largest shipping and logistics company, in a major refit and rebranding programme, with five vessels successfully completed so far. Two more ferries are currently at the Dunkirk-based repair yard, which is the closest facility to the main cross-channel ferry routes. Three of DFDS’ ‘D-Class’ ferries – the Dover Seaways, Dunkerque Seaways and Delft Seaways – were upgraded in just three weeks. These vessels operate on the Dover-Dunkirk route. DFDS - Flandres- DSDu- 0550_LRNext to the normal dry docking work scope, Damen Shiprepair Dunkerque carried out extensive work and overhauled the propulsion, stern and bow thrusters, rudders, engines and repainted the vessels with the company’s new livery, requiring an impressive 11,000 sq m of paint per ferry. The Dunkerque Seaways’ bow doors were also rehung and the Kongsberg Power Management and Control System were upgraded with the latest hardware and software. http://www.hellenicshippingnews.com/damen-shiprepair-dunkerque-carries-out-major-refit-and-rebranding-project-for-dfds-seaways/

450 passengers of the "Dover Seaways" were evacuated from the ferry in Loon Plage, near Dunkirk, after a bomb scare was caused by an abandoned bag on Jan 16, 2016. At 4:15 p.m., the staff discovered a suspicious backpack in a garbade dump in an area where vehicles were parked. The 450 passengers and crew members were evacuated into a building in the port terminal awaiting the arrival of deminers. The operation ended around 7:10 p.m. when deminers found out that the backpack contained only sandwiches and eggs. The 450 evacuees were able to return onto the ship, which left port soon after.

Dover Seaways is back

The "Dover Seaways" returned to regular operation with a departure from Dunkirk on Nov 22, 2014, at 4 a.m. after extensive repair work at the foreship after the ferry hit a pier at the departure from Dover on Nov 9. 13 tons of steel have been replaced within 10 days during the repair at Damen shipyard in Rotterdam, and the last repairs will be carried out when the ship is undergoing its annual maintenance in dry dock in January 2015. Photos: http://www.tugspotters.com/site/content/2014/11/union-11-en-multratug-18/