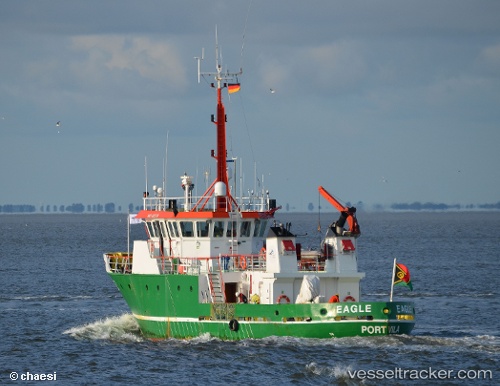 Person on guard ship threatened to jump over board

On April 6, 2022, at 6:14 pm, the KNRM boat of IJmuiden was notified about a person in trouble aboard the 'Eagle' 20 miles off IJmuiden. The person had psychological problems and threatened to jump over board. The KNRM was asked to be on standby in case he acted this way. The person was brought under control right away. Within 8 minutes he was in the hypothermia stretcher. Once in the port, the police, KMAR and ambulance were already on site and the person was handed over to the medical staff. Report with photo: https://www.knrm.nl/nieuws/knrm-reddingstation-ijmuiden/persoon-in-problemen-8740

The 'Eagle' has rescued two men in a state of shock and relief after being stranded on a small boat near a wind farm for more than 28 hours. Their craft was drifting 30 miles from shore, without a flare or lifejackets. The 'Eagle' was doing guard duty at the TWBII wind farm in the German North Sea when the 'Eagle' heard a weak distress signal, setting off a nine-hour rescue mission on Nov 12, 2020, at 2.45 p.m. The words “drifting towards a wind farm” were received and sparked a search with two other vessels in the vicinity, around 40 miles from Lauwersoog. By 4 p.m., after several miles of sailing, the 'Eagle' came across the small fibreglass pleasurecraft 'Invisible Touch' which was rolling violently in 25 knots wind süeed and drifting towards outer shipping lanes. The two German men on board, had spent more than a full day trying to contact other ships for help, using a handheld VHF radio which was running out of power. It was not possible to get alongside as the boat would of split open the hull on impact, so the ship managed to get close enough to throw a rope to them which was very dangerous as none of the two men on board had life jackets on. The ERRV 'Eagle' then rescued the boat near the wind farm, towing it in the North Sea towards shore, when at 6 p.m. the lifeboat 'Hamburg' of the DGGzRS arrived to take them the rest of the way to Borkum island, arriving around midnight. Reports with photo and video: https://www.energyvoice.com/oilandgas/north-sea/279511/north-sea-rescue-boat-windfarm-28-hours/ https://www.seenotretter.de/aktuelles/seenotfaelle/ansicht/news/seenotretter-bringen-manoevrierunfaehiges-motorboot-in-sicherheit/