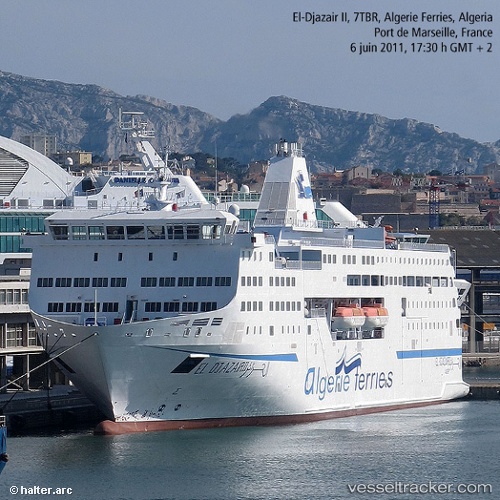 The operation of transferring the 648 passengers from the 'Djazair 2', coming from Marseille, which docked on March 18, 2020, at 3.30 p.m. at the port of Oran, to the Andalusian complex, for a 14-day confinement has been initiated. Their vehicles will be confined aboard the ferry in preparation of a disinfection operation. The crew will also be confined to the ship. A medical team made up of 10 general practitioners, 15 paramedics, 2 specialists in infectious diseases, two others in pneumology, as well as two pediatricians will stay with the passengers, to ensure follow-up and care throughout the period of confinement. Two pediatricians were also mobilized due to the presence of 25 children and 3 newborns among the passengers.

In the night of Jan 13, 2019, the SAR helicopter Helimer 215 of Salvamento Marìtimo carried out a medevac of a female passenger aboard the "El Djazair II". She suffered from kidney failure. The patient was hoisted and transferred to the Can Mises hospital in Ibiza.