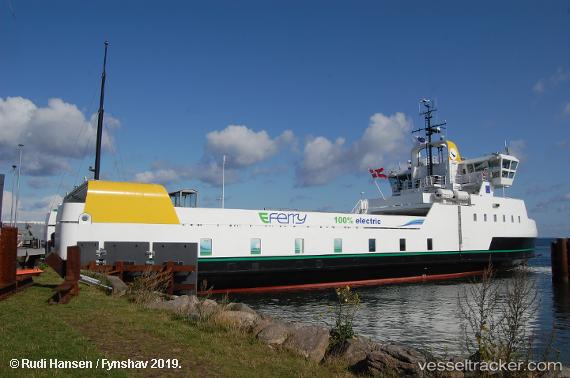 Full-electric ferry ELLEN out of service for three weeks

Come 11 November, Denmark’s first full-battery ferry, the 59.5m long and 12.8m beam ELLEN, completed at Søby Værft for Ærøfærgerne, will be out of service for three weeks for optimizations and replacement of 168 of its 840 battery modules.

Ferry sidelined due to software trouble

A technical error occurred in the software of the "Ellen" in the afternoon of Sep 8, which meant that all departures on the route Søby-Fynshavn with Æro's new electric ferry had to be canceled for the remainder of the day and on Sep 9. As the cause has not yet been found, the ferry willl also have to stay sidelined in the port of Søby all day on Sep 10. The error in the ferry's software meant that the main engine could neither drive nor reverse. Two companies were collaborating to investigate the problem. In total, there were three operating systems that need to be checked which took time and needed patience because all the systems have to be run through. All passengers who were booked on the ferry will be contacted by the operator Ærøfærgerne accordingly. The ship remained at the quay in Søby on Sep 11. As some electronics were still not working after the failure in the ferry's advanced computer system, it was not known when the ferry would be ready to resume sailing. The fault which meant that the ferry could not reverse was still not found on Sep 12. There have now been two different companies aboard and in total there are three operating systems to check. Now they made an emergency solution that raises an alarm if the error occurs again. Then the captain has to restart the system, and then the "Ellen" should be able to reverse. After the emergency solution was installed the ferry left Søby on Sep 15 at at 9.35 a.m. and returned to its service to Fynshav where it berthed the first time after repairs at 10.40 a.m. the same day.

The "Ellen", the first ferry in Denmark to be fully powered by electricity has entered service on Aug 14, making it the first in the country without a diesel engine on board. The "Ellen" is sailing between the ports of Søby and Fynshav, connecting the islands of Ærø and Als. It is powered by a battery system with a capacity of 4.3 megawatt hours, and does not emit environmentally-harmful substances during operation. The e-ferry took two years to construct at the shipyard in Søby, and it was built through a partnership between Ærø Municipality and the European Union. The "Ellen" can sail approximately 40.7km between charges, giving it a range that is seven times longer than any other fully electric car ferry. The distance between Søby and Fynshav is 17.2km miles, and it's 15.2km between Søby and Fåborg. This means that it is capable of making a round-trip between the destinations and returning to the charging station in Søby to get topped up again.