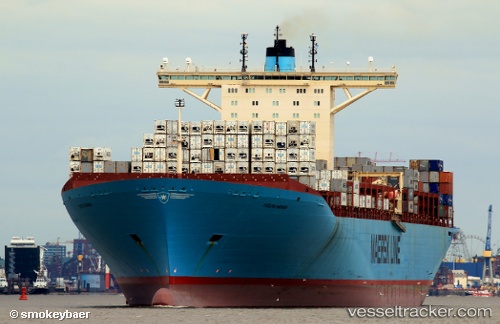 Experienced a problem with the main engine, due to a broken pipe,

In the evening of Aug 30, 2014, the crew of the "Evelyn Maersk" saved 352 boat people from a fishing vessel that had engine trouble and took water in, in the Mediterranean. One of the Mediterranean's RCC centers requested the Container ship to head towards a fishing boat which took in water. After a few hours of sailing the distressed vessel was located, and it turned out to have 352 boat people on board, among them 43 children. On Aug 31 at 3 a.m. all refugees, coming from Syria and the region of the Horn of Africa, were aboard the Maersk ship which was en route from Suez to Algeciras. On Sep 1 the refugees were disembarked in Trapani on Sicily's west coast. On Sep 2, after the landing of the refugees, the ship resumed the interrupted schedule.