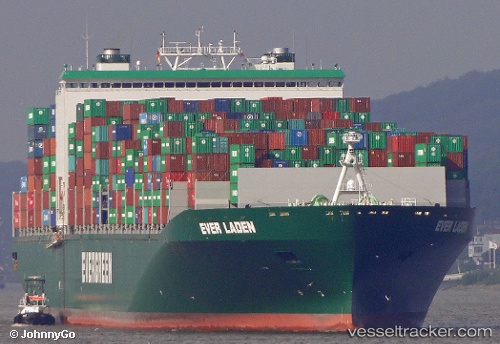 Evergreen is supersizing its series of so-called L-class boxships. According to Alphaliner, the Taiwanese carrier currently operates a fleet of 30 such vessels, and it remains unclear how many will be enlarged. According to Alphaliner, the upgraded ships will have a capacity of 9,466 teu, compared to an original intake of 8,452 teu. Most of the increase will come from raising the vessels’ deck houses. The first jumboized ship, Ever Laden, arrived on the US East Coast this week, while a sister ship, Ever Lenient, is currently being upgraded at China’s Huarun Dadong Dockyard.

The ore carrier "China Steel Innovator" slammed into the starboard side stern of the "Ever Laden" on June 19, 2018, at 9.40 a.m. which was berthed at the Evergreen Pier 79 Container Terminal, while maneuvering in Kaohsiung upon its arrival from Port Hedland with a cargo of ore to get to berth No. 101. in poor sight and adverse weather. Both ships sustained damages. The ore carrier dropped both anchors and managed to slow down, but was unable to avoid the accident despite tug assistance. The ship meanwhile berthed at the Kaoshiung Bulk Terminal. Taiwanese report with photos and video: https://tw.appledaily.com/new/realtime/20180619/1375812/