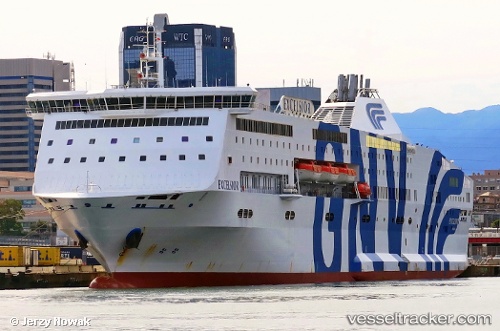 In the morning of Jan 1, 2021, a passenger needed medical assistance aboard the 'Excelsior' enroute from Tanger-Med to Genova about 20 miles from the Spanish coast. The ship requested a medical evacuation. The Radiomedical Center recommended an urgent ,edevac by helicopter. The MRCC in Valencia mobilizes the Helimer 215 which hoistd the passenger and transferred him directly to the hospital.

563 holidaymakers who had been stranded in Morocco due to the COVID-19 pandemic have been repatriated by the 'Excelsior' and arrived in Sète on June 18, 2020. This was the largest contingent since the weekly health rotations have existed. The European vacationers, mainly motorhomes (235 vehicles today), found themselves stranded in Morocco when the borders were closed due to the coronavirus. Each passenger was followed medically before, during and after the trip.

The start of the charter of the "Excelsior" by SNCM on Feb 23 as a replacement for the "Napoleon Bonaparte" until September 2014 from CNG was marked by a significant delay, following a control by Italian maritime authorities. The ship will pass under the French flag in April. The "Excelsior", with hundreds of furious passengers aboard, was finally able to sail from Marseille, but more than 8 hours after the scheduled time. Although the navigational certificates of the "Excelsior" were not expired, the authorization last week was only valid for a single journey. The company risked ending up with the same problem. The Italian authorities on Feb 2 issued a series of requirements for future crossings. The company treated them with diligence and solutions have been made. For now, the Italian authorities are considering a visit on board on Mar 16 and 17. SCNC were waiting for clarification from them and preferred to cancel the next voyage to Tunisia to avoid further annoyances that were beyond their control. The problem should be solved with the passage of the ferry which temporarily sailed with a second Italian captain dubbed by French officers under the French flag. Therefore, authorizations will be issued by the French Maritime Affairs. A shutdown of several weeks was already planned between Mar 4, the date of the expected return from the second trip to Tunis, and Apr 12, when the "Excelsior" will be starting its rotations to Corsica.