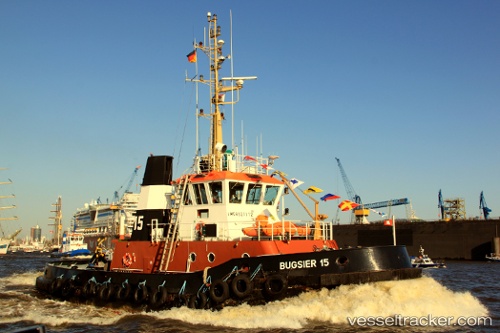 Coming from Ijmuiden, the "Thor Endeavour" allided with the tug "Bugsier 15" in the New Southern lock of the Kiel-Canal in Brundsbüttel upon entering on June 10, 2017, at 9.30 a.m. The tug was assisting the bulkcarrier at the bow and was pushed into the gate. Part of the fendering of the tug tore off and got stuck at the gate. Workers tried to remove it before it could fall into the water, which would enforce a closure of the gate for the salvage. The "Theor Endeavour" may only continue the canal transit with a permanent tug assistance. Around noon she proceeded towards Kiel on the way to Kalmar with the "Bugsier 15" as a stern tug despite of the slight damage such as dents and bruises it had suffered. It then headed to the Warnemünde Yard in Rostock for repairs where she docked on June 11 at 4 p.m. The bulkcarrier continued its voyage from Kiel after a two hours break and reached Kalmar on June 11 at 6 p.m. The "Bugsier 15" was repaired at the Norder Yard in Hamburg from June 19 to 24. German reports with photos: http://www.kn-online.de/News/Nachrichten-vom-NOK/Kollision-in-der-Schleuse-Brunsbuettel. http://www.boyens-medien.de/artikel/dithmarschen/missgluecktes-manoever-in-der-schleuse.html

During the assistance of the Cyprus-flagged bulkcarrier "Okyalos" (IMO-No.: 9145059), on Mar 16, 2014, which was unloaded transiting the Kiel Canal enroute from Rotterdam to Liepaja the wire of the "Bugsier 15", which was serving as stern tug, broke. The bulker was pushed against the pilings in Kudensee, and the "Bugsier 15" was disabled due to a damage of the winch on the ships aft. It had to be replaced while the bulker continued its eastbound voyage assisted by the tug "Luchs". The accident was caused by stormy NNE-wind. The tug remained in Brunsbüttel and returned to Hamburg on Mar 18. entered the Norder Yard for repairs at 2.45 p.m.

On Feb 12, 2012, at 6.30 p.m. the Antigua-Barbuda-flagged cargo m/v "Panagia" (IMO: 9305295), whilst coming from Rauma, was in collison with the eastbound sailing tug "Bugsier 15", in the Kiel-Canal at km 52,5, between Breiholz and Rüsterbergen. The cargo vessel suffered scratches, the tug was damaged on port side in the region of the exhaust pipe and crane. Bot ships were allowed to continue their voyages, but had to berth in Brunsbuettel for surveys. The "Panagia" berthed at 11 p.m. and sailed on Feb 13 at 3.20 p.m. for St. Nazaire. The "Bugsier 15" sailed at 2.30 p.m. At the time of the accident there was slight fog with a visibility of 750 metres. No injuries, no spill reported. The police Brunsbuettel was investigating.