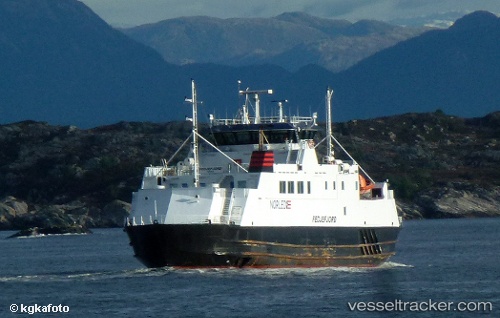 The 'Fedjefjord' was surveyed by divers at the quay at Sævrøy on Dec 12. The investigations showed that one thruster, was destroyed. The ferry was towed to a the Bergen Group BMV shpyard in Bergen where she arrived at 7 p.m. Operator Norled started investigating the incident. The ferry 'Utne' was deployed as a spare ferry with a fiirst departure from Sævrøy at 4.25 p.m. There will be normal operation again on the connection on Dec 13.

Ferry ran on rocks off Sævrøy

The 'Fedjefjord"' on Dec 11, 2019, ran aground on its way to Fedje at 10.30 a.m. a few minutes after she left Sævrøy in Austrheim. The ship got stuck on an islet on the left and suffered water ingress. Everyone was told to put on life jackets. There were 15 passengers and seven crew members on board. The vessel tried to sail back to Sævrøy with its own engine. At 11.15 the ferry, however, lost engine power and dropped anchor. The tug 'Boris' (IMO: 9334753) was called from Mongstad. At the same time, the "Draapen" took on board firefighters who were going out to the ferry. No injuries were reported. On the quay at Sævrøy, ambulance, police patrol and fire trucks were ready to receive the 'Fedjefjord'. Inside the waiting room at the Sævrøy ferry quay a stretcher has been made clear. The tug 'Boris' (IMO: 9334753) pushed the ferry back to the quay, where it arrived at 11.36 a.m. and could finally be berthed despite some trouble caused by the bow damage at port side. Norwegian reports with photos and video: https://www.bt.no/nyheter/lokalt/i/VbrKb4/ferge-grunnstoette-paa-vei-til-fedje-jeg-ble-vettskremt https://www.nrk.no/hordaland/ferje-gjekk-pa-grunn-_-tar-seg-til-land-for-eiga-maskin-1.14818554

In the morning of Aug 7, 2019, the "Fedjefjord" suffered a technical error, and the Fedje - Sævrøy was shut down until the 10.45 a.m. departure from Fedje. The reason was a fault on the electrical system on board the ferry which, however, was resolved quickly.