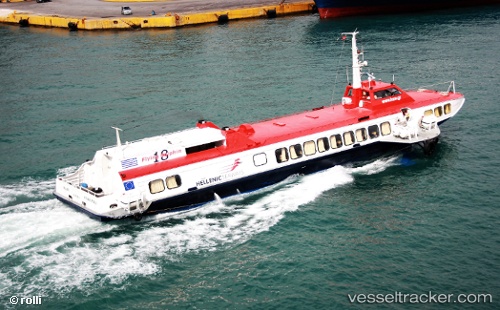 The Port Authority of Poros was informed in the afternoon of Oct 20, 2021, by the Captain of the 'Flying Dolphin XIIX" about a mechanical damage to the port side main engine while the ship was operating its scheduled route Spetses - Hydra - Poros - Piraeus. The ship safely reached the port of Poros and disembarked the 75 passengers who were taken to their destinations by the comapany as well as 25 passengers who were waiting at the port of Poros. The Port Authority of Poros initially banned the ferry from sailing. AFter the presentation of a class maintenance certificate by the monitoring classification society, a single voyage to a shipyard in Perama was allowed to repair the damage.

The Port Authority of Hydra was informed in the afternoon of July 8, 2021, by the Captain of the "Flying Dolphin XIX" about a mechanical failure of the port side main engine during its scheduled service from the port of Poros to the port of Hydra. The ship sailed on a conventional prpopulsion to port and safely disembarked its 82 passengers, 51 of whom had reached their final destination. The Hydra Port Authority initially banned the ship from sailing. After the presentation of a class maintenance certificate by the monitoring classification society it allowed an individual voyage for a yard in Perama to repair the damage. The remaining 31 passengers were transported to their destinations with the care of the ship owner.

The Port Authority of Poros was informed in the afternoon of July 3, 2021, by the Master of the 'Flying Dolphin XIX', that intense vibrations were found in the propulsion system, while sailing in the waters of prefecture of Aegina during the scheduled route from the port of Piraeus to Poros, Hydra, Spetses, P. Heli and return, with one hundred passengers on board. The ship continued sailing with conventional propulsion to the port of Poros, where it safely disembarked all passengers, who were forwarded to their destinations with the care of the company. An inspection was carried out by the local Ship Inspection Unit of the port of Poros. With the assistance of a diver, a crack was found in the port side wing retaining bearing of the propeller shaft bearing of the main engine. The Port Authority prohibited the departure of the ship until the presentation of a certificate of class maintenance by the attending classification society.