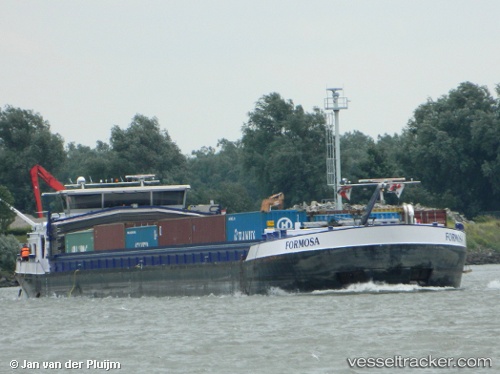 On Sep 21, 2019, at 8 p.m. the "Formosa", 3229 ts (EU-No.: 02331202), allided with a railway bridge on the Twente Canal. The 208-TEU-barge had loaded containers at the terminal in Almelo. To be able to look above the containers, the skipper had raised his height-adjustable wheelhouse to a higher position. On the way back to Rotterdam, where the Formosa should have arrived on Sep 23, that position turned out to be too high to pass the railway bridge between Almelo and Wierden at the Het Dollegoor industrial estate. The wheelhouse of the ship was partially torn off, a car on the deck ended up in the Twente canal, and the 50 year old skipper was slightly injured. He was hit by a piece of aluminum that broke off. The man was transferred to hospital. The two other persons on board were not injured. After the accident, ProRail investigated the bridge for a few hours, stopping train traffic on the route between Wierden and Almelo. Also canal traffic was timewise stopped. The ship was moored in Twente. Dutch reports with photos and video: https://www.tubantia.nl/wierden/schip-ramt-spoorbrug-twentekanaal-stomme-fout~a8520578/?referrer=https://www.google.com/ https://www.destentor.nl/reggestreek/schip-ramt-spoorbrug-twentekanaal-treinverkeer-ligt-stil-stomme-fout~a8520578/ https://www.rtvoost.nl/nieuws/318710/Schip-vaart-tegen-spoorbrug-in-Almelo-aan-treinverkeer-gestremd

On the way to repairs

While the "Aarburg" had unloaded its cargo in Antwerp and entered a yard in Rotterdam for repairs, the "Formosa" on Jan 20 had reached Ludwigshafen alongside the barge "Kruier" enroute to Rotterdam for repairs. Photo: http://www.binnenschifferforum.de/forum/attachment.php?attachmentid=517474&d=1421760053

The "Formosa" was in collison with the "Aarburg" on the Rhine at river km 559 near St. Goar-Fellen in the morning of Jan 15, 2015. Both ships suffered severe bow damage and remained at the accident site. The "Aarburg" veered to port while sailing downstream at 3.30 a.m. and slammed into the "Formosa" which had been moored at the port Hund and suffered water ingress. One deckhand below deck only by chance escpated injury. Then the container barge got stuck on the right Rhine shore with the stern. A breathalyzer test of the master of the "Aarburg" showed that he was intoxicated with an alcohol Level of 1,58 per thousand. His licence was withdrawn. Rhine traffic was not affected for the time being, the river authority Bingen was on site to coordinate salvage work which included dewatering the leaking "Formosa" which was towed to the Loreley Port later where the cargo of rape is to be lightered completely before the ship may proceed to a repair yard in the Netherlands. The "Aarburg" which suffered damage both to the bow and the rudder gear was remaining at an anchorage of Bad Salzig to be towed alongside another ship of the Deyman GmbH in Harne/Ems to its destination. German reports and photos: http://www.wochenspiegellive.de/hunsruecknahe/staedte-gemeinden/st-goar/nachrichtendetails/obj/2015/01/15/zwei-schiffe-auf-dem-rhein-kollidiert/ http://www.wochenspiegellive.de/en/hunsruecknahe/staedte-gemeinden/st-goar/nachrichtendetails/obj/2015/01/15/update-schiffskollision-unfallverursacher-war-alkoholisiert/ http://www.binnenvaartlog.nl/?p=28512 http://www.swr.de/landesschau-aktuell/rp/schiffsunfall-bei-st-betrunkener-kapitaen-rammt-gueterschiff/-/id=1682/nid=1682/did=14886768/ap7y1i/ http://www.rhein-zeitung.de/region/lokales/hunsrueck_artikel,-Havarie-auf-dem-Rhein-Betrunkener-Kapitaen-verunglueckt-mit-Containerschiff-_arid,1258721.html