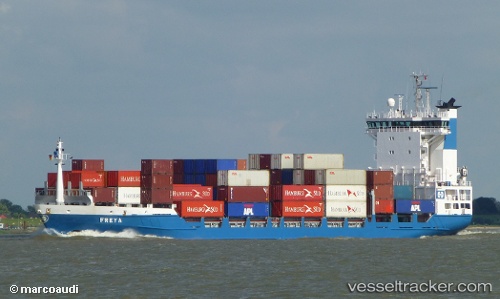 On Jan 27, 2017, at 7.30 p.m. the "Freya", coming from Helsingborg suffered engine trouble while approaching the locks of the Kiel Canal in Kiel-Holtenau. The ship stopped the approach and returned to the Kiel Fjord for troubleshooting. The crew found out it was a fault between the automatic and manual engine control. After it was fixed, the ship started the next attempt to get into the canal. It finally continued the voyage at 11.30 p.m. and berthed at the Athabaska Quay in Hamburg on Jan 28 at 11 a.m.

The 18-year-old Indonesian seafarer was from the ship Freya which was bound for Immingham port. AoS’ Immingham port chaplain Fr Colum Kelly was the first visitor to go on board the ship, which berthed at the port late Wednesday night. “I got a phone call from the harbour master who asked if I could go on as the crew were very distressed. “The captain and the crew member who witnessed the accident were particularly cut up. There is a lot of guilt and anger about. I stayed with them for most of the night,” said Fr Colum. Fr Colum was back on board on Thursday morning where he set up WiFi connection and spent more time with the crew of 10, who are Dutch, Russian and Indonesian. It is understood the missing seafarer was on his first contract with the ship. Fr Colum said, “On leaving this morning the captain said ‘It was a great relief to have someone like you as our first visitor…someone who came to try to comfort us, rather than ask questions.” “I’m sure there are many questions to be answered but at least Apostleship of the Sea has done what we can for now,” added Fr Colum. In a press release on Thursday the Maritime and Coastguard Agency said a comprehensive search of the river was conducted overnight involving Humber and Cleethorpes RNLI lifeboats, a rescue helicopter from RAF Leconfield and 25 commercial vessels from the Grimsby area which also helped with the search. A thorough search of the shoreline was undertaken by Cleethorpes Coastguard Rescue Team but the seafarer was not found. Source: Apostleship of the Sea

Search terminated for the time being

An intensive search for the man lost over board the "Freya" has been terminated for now on the River Humber. On Sep 3, 2014, at 8 p.m. the Coastguard was alerted by Humber VTS that a crew member had gone over board close to Grimsby while the ship was underway to Immingham. A comprehensive search of the river with about 20 craft took place over night involving Humber and Cleethorpes RNLI lifeboats, a rescue helicopter from RAF Leconfield and 25 commercial vessels from the Grimsby area which also helped with the search. A thorough search of the shore lines was undertaken by Cleethorpes Coastguard Rescue Team but no sign of the man was found. It was likely that Cleethorpes Coastguard would continue with their searches and there may be more shore line searches too.