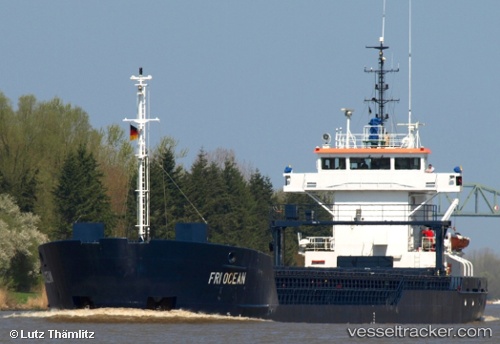 Tobermory RNLI’s volunteer crew have been commended for their ‘commitment, perseverance and professionalism’ in carrying out a marathon 31 hour rescue mission to the "Fri Ocean" after it went aground on the east coast of Mull. The RNLI’s Operations Director, George Rawlinson, singled out the station’s full time Coxswain and Mechanic for particular praise. Tobermory Coxswain Andrew McHaffie is commended for ‘his leadership and co-ordination of resources’ during the rescue operation. Station Mechanic Jock Anderson, who was on board throughout the 31 hour ‘shout’, is praised for ‘his guidance on board the casualty vessel in protecting the crew of both vessels from the dangers of CO2 poisoning’. The rescue operation - the longest in the station’s history - began early in the morning of June 14 when Tobermory’s Severn class lifeboat, Elizabeth Fairlie Ramsey, was launched shortly after 6am to go to the aid of the vessel hard aground two and a half miles south of Tobermory. The volunteer crew assisted the crew of the vessel with pumping operations for much of the day and then stood by awaiting an opportunity to refloat the vessel. That evening the vessel was successfully refloated and was escorted to the shelter of Salen Bay until first light with Tobermory lifeboat standing by. The following morning, Tobermory lifeboat escorted the cargo ship to Oban and working with Oban RNLI's lifeboat, the vessel was safely anchored in Oban Bay for further investigations and a damage assessment to take place. Tobermory RNLI Lifeboat Operations Manager, Ian Stevens said: ‘This rescue operation was not only the result of first rate teamwork but also demonstrates the commitment of our volunteers who give up so much of their time to save lives at sea. I’m also pleased that Andrew and Jock’s outstanding commitment has been recognised by the RNLI.’

Investigation has been launched about grounding of 'Fri Ocean'

An investigation has been launched into how the 300ft cargo ship 'Fri Ocean' ran aground on the Isle of Mull in broad daylight and good weather conditions. The Fri Ocean, which was carrying timber from Fort William to Sweden, sailed down the Sound of Mull and ended up on the rocky shoreline south of Tobermory at around 6am on Friday. There were fears of a pollution spill from the fuel-laden ship as bad weather was forecast to hit the area.

Fri Ocean refloated the day after its grounding

The "Fri Ocean" has been helped by lifeboats into Oban harbour. The coaster on June 15 around 6 a.m. was anchored in the harbour, awaiting further inspection. The Tobermory lifeboat had stood by the vessel all day on June 14 while temporary patching was carried out. On June 15 in the morning, the Oban lifeboat led it into the bay and traffic both in and out of the entrance was stopped to allow its safe entry. Off the Isle of Kerrera, the ship was now awaiting damage surveys and an MAIB investigation. The volunteer crew returned to Tobermory at 12.45 afternoon and the lifeboat was refuelled and ready for service by 1400, more than 31 hours after launching. Reports with photo and video: http://forargyll.com/2013/06/31-hour-shout-tobermory-lifeboats-longest-ever-ending-in-joint-operation-with-oban-lifeboat/ http://rnli.org/Pages/Video-Details.aspx?VideoItemID=bzX26ZPA