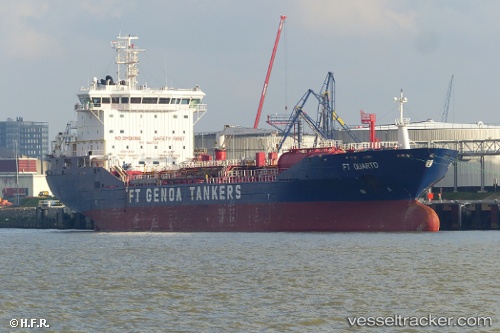 The quarantine of the 'FT Qiarto', which started on April 20 in Antwerp, has been enlengthened to mid-May. A new test for the coronavirus last week found that two more crew members were infected. They stayed in seclusion in an Antwerp hotel. The captain was in intensive care in the hospital and stil being ventilated. The first mate who also fell ill, but much less than the captain, had stayed on board and was now healed.The tanker remained berthed at quay 317 in the Fifth Harbour Dock. Initially, it seemed that the ship could leave after a week because none of the 18 crew members were infected. But a new test from Saniport (FPS Public Health) thwarted that plan. Among the two crew members who also caught the virus, was also one officer. They were disembarked and taken to a hotel. The cook was not feeling well and was isolated in his cabin for safety reasons. An officer and a deckhand wree now cooking. The crew was not lacking in provisions and medicines. The shipping company took care of the supply. There were enough handles, gloves and mouth masks on board. The Port Authority had previously pointed out that the crew should measure the fever several times a day and closely monitor the symptoms. Before the tanker can sail, Saniport will conduct new tests. The tanker finally left the port of Antwerp on May 14. Those who were still on board tested negative. All authorities involved subsequently gave permission to sail, and it left the port bound for Le Havre, ETA May 16. The ship had berthed on April 20 in the Fifth Harbor Dock. The captain remained in intensive care last week. All the time the shipping company and the port authorities provided supplies and medicines.

The 'FT Quarto' that has been quarantined in Antwerp could sail on April 26 or 27. The captain was affected by the coronavirus and is on intensive care in an Antwerp hospital. The first officer also got infected, but was getting better so he can replace the captain. He was fever free. The rest of the crew - ten Romanian officers and nine Philippines - tested negative for corona. The captain has been put into an artificial coma and was being intubated. ” The shipping company, the Italian Quarto, ensured that it was supplying the crew of the tanker with sufficient supplies. Nobody was allowed to disembark.

Sailing ban after captain and 1st officer were tested positive

THe 'FT Quarto' remained quarantined.at berth 317 in the port of Antwerp after the captain tested positive for the corona virus. He was transferred to a hospital in Antwerp. No one was allowed to get on or off the ship. The first officer was also infected, but showed no symptoms. The rest of the 18-man crew were not infected. The port of Antwerp has issued a sailing ban. Normally, the first officer could take over the command of the captain if the shipping company agrees, but this was not possible due to the first officer's positive test. The situation was under control and was carefully monitored. It was unknown when the ship will be able to sail. The Health and Care Agency assisted the shipping company to monitor the conditions of the crew, both from a medical point of view and in terms of well-being.