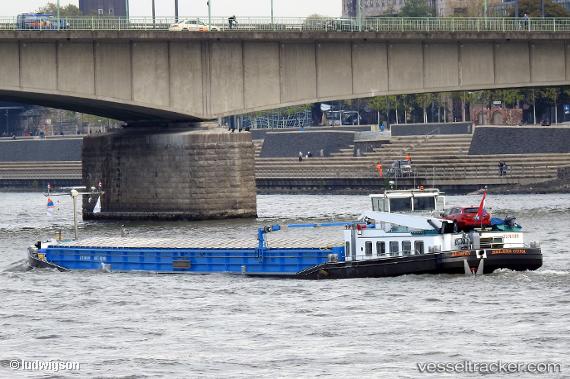 The seizure of the "Helena Cora" after six weeks of detention in Flushing has been lifted after the after the involved parties agreed on a solution and the salvage bill has been paid to Multraship and Kotug Smit by the uninsured owner Jan Heuvelman. The money had been deposited on an anonymous account administered by a church member of his church, the reformed municipality in Ederveen.Meanwhile the theologian Maarten Wisse, professor of the Protestant Theological University in Amsterdam stated that there were no points in the Bible that prohibit believers from taking precautionary measures such as insurance. Heuvelman said that he depended on the Lord in all his work, being insured by the Lord's care. The "Helena Cora" left Rotterdam on Nov 2 bound to Dortmund again and has actually reached Zwijndrecht.

After a detention of 1,5 months, the "Helena Cora" which had run into trouble on the Wester Scheldt on Sep 12, has been released on Oct 27 after all accounts have been paid. Fortunately, there was no damage to the ship. It had been detained following the salvage by Multraship and Kotug Smit Towage from Terneuzen realizing the fact that owner Jan Heuvelman (47) from Ederveen, who is also the director of the Petrus Dathenus School in Hilversum, had no insurance for religious reasons. His church, the "Reformed Municipality in the Netherlands" in Ederveen, has now paid all bills.

The "Helena Cora" and its cargo of aluminium with a value of at least 1,5 million Euro have been seized on behalf of the salvage companies Multraship from Terneuzen and Smit-Kotug on Sep 28 which had refloated the barge of Flushing East on Sep 12. Next week, discussions with the stakeholders will be held again, including the owner Heuvelman-De Groot. He hopes that a solution can be found. The salvors, together with the charter company Van Aerde, had pulled the "Helena Cora" quickly off after the cargo of aluminium had shifted, and returned the ship to the Sloehaven in Flushing where it remained docked since then. Dutch report with photo: https://www.schuttevaer.nl/nieuws/varend-bestaan/nid27378-multraship-legt-beslag-op-helena-cora.html