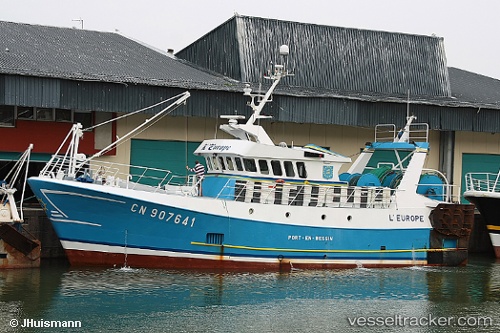 The "L'Europe" suffered engine failure in the night of Jan 24, 2016. The ship was taken in tow by the trawler "Le Vauban" and pulled towards the coast about six hours. Then the smaller trawler "Droopy", a smaller boat, took over and towed it into the port of Port-en-Bessin, assisted by the local SNSM-lifeboat. The engine failure could come from the turbo, according to skipper Jérôme Vicquelin, and should quickly be repaired. French report with photo: http://www.ouest-france.fr/normandie/bayeux-14400/port-en-bessin-en-panne-l-europe-remorque-par-deux-autres-chalutiers-4760609

On Jan 27, 2016, at 6 p.m. the CROSS Jobourg was alerted by the skipper of the "L'Europe" after a fire broke out in the engine room. The trawler with a crew of five on board was located 15 nautical miles east of Barfleur. The engine room was floode with CO² and the fire could be brought under control. However, the trawl was in the water, the ship was stopped and had total electrical failure. The CROSS Jobourg dispatched an EC225 helicopter of the Navy base in Maupertus with four members of the marine brigade of the Cherbourg naval base on board to investigate and secure the ship. At the same time, two trawlers, the "Vauban" and "Père Daniel," which wree in the vicinity, diverted towards the trawler. CROSS Jobourg also alerted the lifeboat "Cap Levi II" of the SNSM station Fermanville. At 7.25 p.m., the marine brigade was airlifted aboard the trawler. The investigations showed no remaining hot spots, and it was confirmed that the fire was extinguished. The main engine, however, was damaged and the trawler could not pull up his trawl. After several attempts, the auxiliary engine could be restarted and the trawl finally brought on board. The trawler "Père Daniel" took the ship in tow to Port-en-Bessin, escorted by the lifeboat, where they arrived at midnight. French report with photos: http://www.cross-jobourg.developpement-durable.gouv.fr/incendie-a-bord-du-navire-de-peche-l-europe-l-a849.html