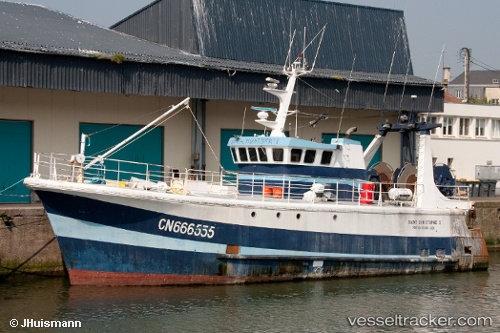 The "Saint Christophe 1" sank in a Devon harbour due to "language difficulties", a report has revealed. She took refuge in Dart Harbour in March but began to sink hours later. When the "Saint Christophe 1" and the "Sagitaire" arrived into port, one of the river officers attempted to explain the berth using hand gestures. But the communication was not understood. The Marine Accident Investigation Branch report said harbour staff were unable to tell the vessel's skipper the vessel would ground as the tide went out. Dart Harbour said it accepted the report's findings and is acting on its recommendations. The report said most of the watertight doors were open and the vessel was not carrying any of the local harbour charts. Neither the harbourmaster nor his deputy knew there was a list of people who could act as translators if needed. A number of changes have been made by Dart Harbour and Navigation Authority: A remote emergency language service will be available at all hours. The language service will be advertised on the harbour's website and in its 2017 Harbour Guide so that foreign crew will know they can ask for help. Notices will be placed on the quayside providing details of the language line. The Harbour Guide will include information in four key languages - Dutch, French, German and Spanish. An arrangement has been made with Britannia Royal Naval College to use Admiralty Jetty as additional berthing for certain vessels. The skippers "displayed a very relaxed attitude" to the safety of their vessels in port and had not attempted to check the tide information, which was available in French. Most of the watertight doors and hatches were either lashed open, or were impossible to close and make watertight, having been disabled at some time in the past. Portholes on the starboard side were also open to allow for ventilation. Had these been secured its possible the vessel would not have been lost, the report says.

The "Saint Christophe 1" has been certified as safe to be towed out of Dart Harbour. After having been refloated on Apr 2, the vessel has remained at Dartmouth Town Pontoon while her future was decided by the insurers. Dart Harbour understands that the vessel will change hands, with local and non-local bidders interested but this is obviously a decision for the insurance company to take. Report with photo: http://www.torquayheraldexpress.co.uk/St-Christophe-vessel-set-leave-Dartmouth/story-29153484-detail/story.html#ixzz46Xv9o2lb

The "Saint Christophe I" was remaing in the crane slings following the re-floating on Apr 2 by the 55m salvage barge "Sea Devil". Essential seaworthy deficiencies as a result of the sinking were actually being rectified so the vessel can be cleared by the Maritime and Coastguard Agency to leave the harbour. Part of the work included improving the watertight integrity of the vessel and sanitisation to make it safe for humans to work on board. The 1,5 tonnes of fish that were on board the vessel when she capsized had been devoured by wildlife such as seals, crabs and a resident conger eel. Dart Harbour was still waiting for a date for the departure of the vessel and an onward destination. Until then, the vessel will remain in a berth suitable for its current state, which could be alongside the salvage barge or another berth in Dart Harbour. The "Sea Devil" was expected to depart on TApr 14, by which time the "Saint Christophe I" will be seaworthy and will be moved to a Dart Harbour berth to await its next move. Dart Harbour continued to work with the vessel’s French insurers and remained open for business for visitors and berth holders. Report with photo: http://www.kingsbridge-today.co.uk/article.cfm?id=103483&headline=Saint%20Christophe%20I%20expected%20to%20be%20moved%20to%20a%20Dart%20Harbour%20berth%20on%20Thursday&sectionIs=news&searchyear=2016