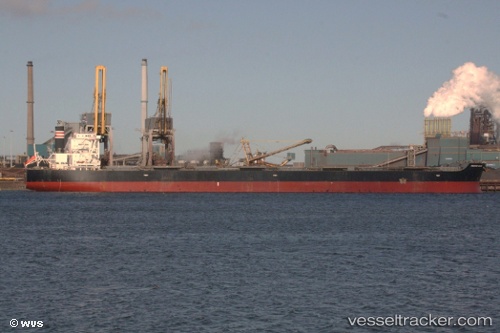 The "Frontier Island" left the port of Ijmuiden, where she had been damaged by the "Golden Ruby" at the quay of the Tate Steel Works on Jan 26, again on Feb 9 at 5.30 p.m. after repairs, being bound for Immingham as next port of call, ETA Feb 10 at 3 p.m.

UK Border Force officers yesterday, September 5, 2012 announced they have closed down an important supply route through Immingham in North East Lincolnshire, after a series of major seizures of the Class A drug. The high purity cocaine was found hidden in loads of coal on bulk vessels that had travelled from Puerto Prodeco, in Colombia, to the east coast port. Seizures have been made on three different vessels in the last three months, with the most recent being eight kilos found on the MV Frontier Island last week.