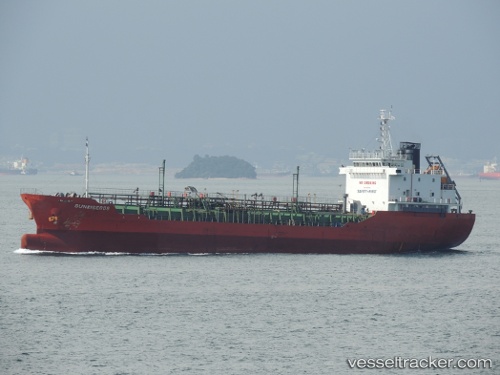 After an investigation, investigators had found enough grounds to determine that the "Sunrise 689" has been hijacked as reported by the vessel’s crewmembers, and were seeking help from the Interpol to track down the pirates. Through an examination of the entire vessel and the testimony of the crew, investigators concluded that the tanker suffered from a piracy attack in international waters. The Investigation Police Agency under the Ministry of Public Security Based will launch an official investigation into the case and will coordinate with the Southeast Asia anti-piracy Center based in Singapore to hunt down the hijackers. It was also confirmed that the vessel’s black box had not been lost as previously reported, but police found it during their examination after the case was handed over to them from the Ba Ria-Vung Tau Border Guard on Oct 15. The provincial border guard force and the Vietnam Coast Guard had handled the case when the vessel was escorted by three Coastguard boats to the coastal city of Vung Tau on Oct 11, nine days after the hijacking occurred. The black box has been sent to the Vietnam Maritime Administration for examination to collect information stored in the device. According to a report of the ship’s captain, Nguyen Quyet Thang, the hijacking occurred on Oct 2 when the ship was transporting 5,226 tons of oil from Singapore to the northern Vietnamese southern of Quang Tri. The hijackers were armed with guns and knives. Some of them took control of the crew, while others destroyed the vessel’s communications system. They assaulted several sailors, including machinist Luong Dai Thanh, who suffered a broken toe and a badly injured left kneecap; and crewman Tran Van Lich, who sustained an ankle injury, the captain said. After offloading about 2,000 tons of oil, the pirates freed the ship at around 2 am on Oct 9 near Thai waters.

The "Sunrise 689" was being investigated after it was led to Vung Tau coast in the southern Ba Ria - Vung Tau province in the early morning of Oct 11. Nearly one-third of the oil the tanker carried was robbed while two members of the crew were injured. The Vietnam Maritime Police Zone 3 in collaboration with the border guard, police and the People’s Procuracy of the province were being responsible for the case. Initial investigations showed that marine equipment inside the ship’s cabins was seriously destroyed with other furnishings scattered over the place. The crew members were questionend by the Vietnam Maritime Police Zone 3 High Command. Also representatives from the Vietnam Maritime Administration and local authorities visited the ship’s crew members. When the investigation has ended, the "Sunrise 689" will be anchored at the Sao Mai-Ben Dinh area in the Vung Tau waters for equipment repairs before heading to Cua Viet Port in the central province of Quang Tri.

The "Sunrise 689" was met by a Coastguard ship reached on Oct 9 around 2 p.m. and was escorting it to Vung Tau. Captain Luong Dai Thanh and Tran Van Lich were the only members of the crew to suffer injuries. Thanh survived the initial assault with some broken toes and kneecap. Lich suffered a sprained ankle during a fall caused by two pirates who kicked him off a ladder. The ship also brought a medical team in to treat their injuries. The other 16 crew members were in good health. The tanker left Singapore on Oct2, but vanished from radar at 4:27 a.m. on Oct 3 around 120 nautical miles north-east of Singapore and 360nm from Ca Mau. The ship carried 5,200 tons of diesel fuel loaded at Horizon Port in Singapore at around 6 a.m. (Hanoi time) and bound for Vietnam. Pirates caught up to them on a speedboat and two small fishing vessels early on Oct 3. More than ten pirates jumped onboard our vessel. They were aggressive, brandishing guns and swinging knives. The pirates ransacked the cabin and navigational equipment, except for the rudder and compass. They also took all the crew members’ cell phones, tablets, clothes, watches and jewelry. The pirates wore masks to disguise their identities. But their voices, clothes and daily habits suggested that they were from Indonesia After boarding the ship, the pirates locked the crew in a tight room and only let them out once a day to cook and eating. The most dangerous and risky moment came when they tried to recapture a cell phone from the mess hall. They took advantage of meal time, when the pirates let their guard down, to take one. There was no signal, so they couldn’t use it. The pirates sailed northeast into the waters of Malaysia, then Cambodia and, finally, Vietnam where they met up with a tanker, which drained around 1,500 tons of diesel from the "Sunrise 689". They intended to take all the oil, but the crew members started to warn them that various maritime security forces were already looking for them. On Oct 9 at around 1 a.m. the pirates gave up. They withdrew on a fishing boat flying the Malaysian flag at the bow and the Vietnamese flag at the stern. With all their GPS equipment destroyed, the tanker sailed until they caught a cell phone signal and made several calls at around 5:30 a.m. to their families. They also made contact with their employer, the Hai Phong Sea Product and Shipbuilding Company in the namesake northern port city. Then they set course for Vung Tau for repairs. Dao Van Quang, director of the Hai Phong company, said their Singaporean partner has sent inspectors to Vung Tau to evaluate the damage to the vessel. Vietnam’s Coast Guard were hunting for the pirates with help from regional security forces. Norwegian report with photos: http://www.vg.no/nyheter/utenriks/vietnam/kapret-oljetanker-kom-til-rette-etter-nesten-en-uke/a/23314552/