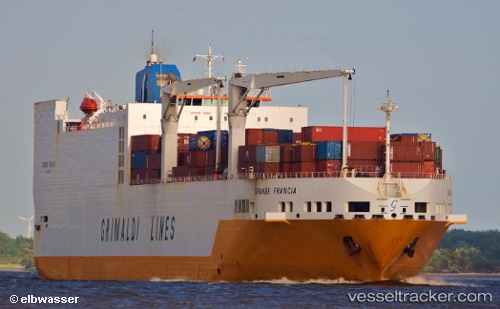 In the morning of Aug 12, 2018, the "Grande Santos" was boarded by several armed men from a boat, which came alongside the ship, anchored on Santos outer anchorage. The crew who spotted intruders alerted the bridge, and the master activated the security system and informed the Santos authorities, requiring immediate assistance. The crew blocked the superstructure or hided inside most safe compartments, waiting for help. A Navy patrol came too late to intercept the intruders because of foul weather. They managed to flee the ship. The cargo area was searched, two broken containers were found, with nothing stolen. But in two other containers bags were found with 1.322 kilo of cocaine inside. The bags were still wet. The police was unsure whether the cocaine was brought by the intruders, or was already on board, loaded during theship’s stay in port. On Aug 7, another Grimaldi-ship, the "Grande Nigeria". also had been involved in a cocaine trafficking attempt, while the ship was berthed at Santos.

The "Grande Francia" suffered engine failure in the afternoon of Nov 18, 2016, in the English Canal, 14 miles north of Cherbourg. The disabled vessel, loaded with vehicles and containers, started to drift towards the French coast with 4,5 knots in unfavourable weather. The semaphore of the National Marine in Hornet remarked the drift of the ship and reported it to the Maritime Préfecture. The salvage tug "Abeille Liberté" (IMO: 9308699) was deployed by the Marine Operations Center of the Maritime Prefecture (COM) to assist the vessel. At 5.30 p.m., the "Grande Francia" was 11 miles off the coast, when the tug reached the vessel. An inspection team of two officers from the tug boarded the casualty to assess the situation. The crew managed to fix the problem and restart the engine which had got water in the fuel system. The vessel resumed the voyage from a position five miles off the coast. It sailed in northeastern direction under the escort of the tug to ensure the durability of repairs. In the early evening it was confirmed there was no risk left, and the escprt ended at the traffic Separation scheme of the Casquets. The "Grande Francia" was enroute from Douala to Hamburg. She berthed at the O'swald Quay in Hamburg on Nov 20 at 9.45 p.m.

No trace of lost containers

The German emergency tug "Nordic" in vain was searching for the containers lost off the "Grande Francia" in the gale Gonzalo on the Northsea SW of Borkum reef. The ship had started to roll in gusts up to 12 Beaufort. After bolts gave way, the containers started to move and went over the side, tearing away the railing on a length of 15 meters. The ship is currently docked in Hamburg where the mess was being cleared up. Several more boxes had crashed or were damaged. The Water Police launched an investigation. the 10 containers which had been loaded with tyres were presumed lost. German reports with photos: http://www.ndr.de/nachrichten/hamburg/Grande-Francia-verliert-zehn-Container,grandefrancia102.html http://www.presseportal.de/polizeipresse/pm/6337/2862397/pol-hh-141023-2-grande-francia-verliert-bei-schwerer-see-zehn-container-wasserschutzpolizei