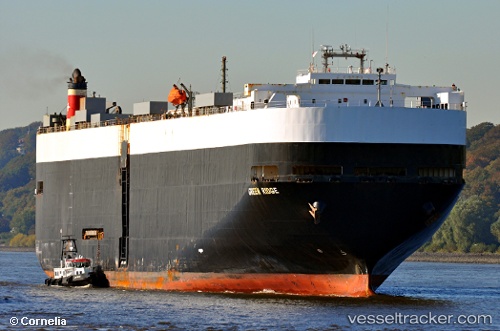 Medevac after accident off Miami

The US Coast Guard medevaced a 48-year-old man from the "Green Ridge" approximately 100 miles southeast of Miami on Sep 4, 2018. The Coast Guard Miami watchstanders received the request from the vehicles carrier at 10 a.m. for a man who fell from the cargo deck and sustained head and neck injuries while operating a forklift aboard the vessel. Watchstanders launched a Coast Guard Air Station Miami MH-65 Dolphin helicopter crew who arrived on scene, hoisted the patient and transported him to local emergency medical services who then took him to Jackson Memorial Hospital. Report with photo: https://coastguardnews.com/coast-guard-medevacs-48-year-old-man-100-miles-southeast-of-miami/2018/09/04/

A multi-agency rescue operation to help a seriously ill crew member of the "Green Ridge" in the Pacific Ocean was cancelled in the morning of Aug 19, 2015, after the man was declared deceased. On Aug 18 at 9:50 a.m., the 11th Coast Guard District Command Center received a report of a sick man aboard the "Green Ridge". The command center requested assistance from the California Air National Guard who dispatched a team of four Guardian Angel pararescuemen to the Green Ridge aboard an Air Force MC-130P Combat Shadow aircraft. The pararescue team jumped into the ocean, boarded the ship and provided medical aid to the man. A Coast Guard Air Station Sacramento C-130 aircraft supported the operation by delivering 10 units of blood from Travis Air Force Base to the 129th Rescue Crew at Moffett Air Field before the team departed to the Green Ridge. The rescue center also contacted the U.S. Navy’s 3rd Fleet to assist, who diverted a Navy ship to rendezvous with the "Green Ridge". The Navy ship's doctor declared the patient deceased on Aug 19 at approximately 6:15 a.m. All rescue units have been released from the case. The Air National Guard team will be taken aboard the Navy ship.

After the "Green Ridge" entered the port of Guam Guam in the morning of Aug 8, 2014, port cargo checkers found a spider during their inspection of 560 vehicles and Guam Customs was called in. First discharge was performed at 8:25 a.m. and final discharge at 4:20 p.m. Upon completion of vessel operations, a spider was found during the inspection of 560 vehicles by port cargo checkers where Department of Customs & Quarantine was immediately contacted. After a thorough inspection conducted by Customs & Quarantine of all the vehicles, about 25 spiders were found which was later determined to be “brown” widow spiders by Dr. Russell Campbell, an entomologist, Department of Agriculture. All the brown widow spiders were exterminated and collected by Customs & Quarantine.