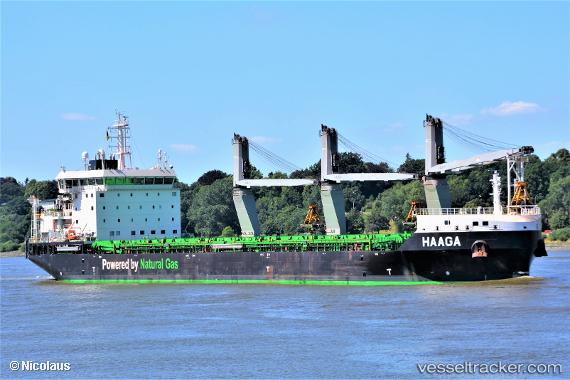 Finland's ESL Shipping has been incurring significant loss of income from the "Haaga" and "Viikki" due to serious technical problems with the conventional mechanics of the high-power cranes, which were subject to warranty. They have significantly interfered with the efficient operations of the vessels and resulted in significant loss of income and additional costs for the shipping company. Due to the delivery times of spare parts, repairs were expected to be completed only at the end of the first quarter of 2019.

Finland-based shipping company ESL Shipping, part of the ASPO Group, has decided to reflag its new LNG-fueled bulk carrier Haaga to the Finnish flag. The flag change took place in Kokkola, Finland, on March 7, 2019. Previously, the 25,500 dwt newbuilding was flying the flag of Portugal. This was criticized by workers unions but the company has now managed to reach an agreement with them.

The new bulk carriers Viikki and Haaga have started operating on the Baltic Sea. ESL Shipping says the 25,600-dwt vessels, 160 metres long and fuelled by liquefied natural gas, produces less than half of the carbon dioxide of previous vessel generation, thanks to LNG and many advanced technologies. Both vessels were built in China, and after completion first sailed to Japan to load a cargo of raw materials. From there, they arrived to the Baltic Sea through the Northeast Passage, which shortened the journey from Japan by three weeks and reduced the emissions of the journey by 40 per cent compared with going through the Panama Canal.