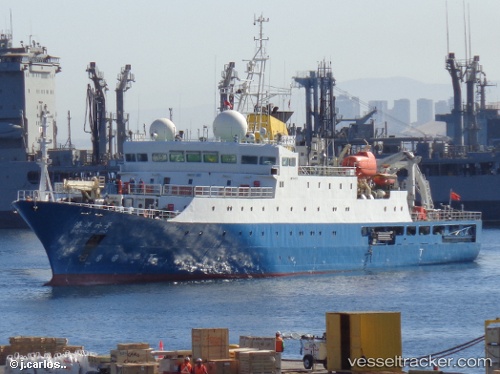 GUANGZHOU, June 27 (Xinhua) -- Chinese ocean scientific research vessel Haiyang-6 set out Monday on a 240-day expedition in the Pacific Ocean, with five foreign trainees on board. The five young scientists from Burkina Faso, the Cook Islands, Ghana, Mexico and Papua New Guinea will work together with Chinese scientists and be trained on the job, said He Gaowen, chief scientist of the expedition. The vessel departed from China's southern province of Guangdong, heading for the Western Pacific to conduct deep-sea geological surveys for climate change, biological and environmental research. The surveys will help China in international efforts to utilize seabed resources and test the latest deep-sea technology. The vessel has on board a remote-control underwater vehicle "Haima," (sea horse) to sample cobalt-rich seabed crusts and other materials. http://news.xinhuanet.com/english/2017-06/27/c_136397375.htm

China's self-designed deep-sea exploration vessel "Ocean No.6" sets sail from a port in Guangzhou, capital of south China's Guangdong Province, July 8, 2016. The vessel will spend 282 days conducting deep-sea surveys and a scientific expedition in Antarctica on a nearly 60,000-km voyage. It will return to the port in Guangzhou in April, 2017. The Chinese research vessel Haiyang Liuhao, also known as Ocean No. 6, set sail on Friday to the Pacific Ocean and Antarctica for a 60,000-km expedition. The ship departed from a port in the south Chinese city of Guangzhou, and is expected to return in mid-April 2017.